Whenever we're confronted with a NY Times trend piece about sad bachelors who yearn, futurism consultants who are so over Brooklyn, or self-loathing Millennials, we ask ourselves: why did these people agree to be interviewed by the second biggest newspaper in the country? Why would they shove themselves into the limelight? What could they possibly get out of this? As we sometimes mention, no one is forcing you to become representative of everything that everyone hates about New Yorkers.

But thank God no one listens to us, because then we wouldn't get to enjoy stories like today's "Move Over, Rat Pack and Brat Pack: Here Comes the Snap Pack", a beautiful love letter to the Instagram-filtering, pajama-partying, method-acting 20-somethings just trying to hustle other rich people into buying their signature handkerchief silk charmeuse slip dresses while snapchatting scenes of their poor live-in housekeeper struggling to do household tasks.

And thank God the NY Times is decadent and depraved enough to put oblivious kids like this on a pedestal just to laugh while they get disemboweled by the internet. If this is not a guilt-free, win-win situation for everyone—self-involved, Snapchat-obsessed post-teens get the attention they seek, NY Times gets all our hate clicks, Gothamist feasts on the entrails, and readers get to enjoy their superiority to these flibbertigibbets—then it is at least the platonic ideal of Brunch Hate Reads. 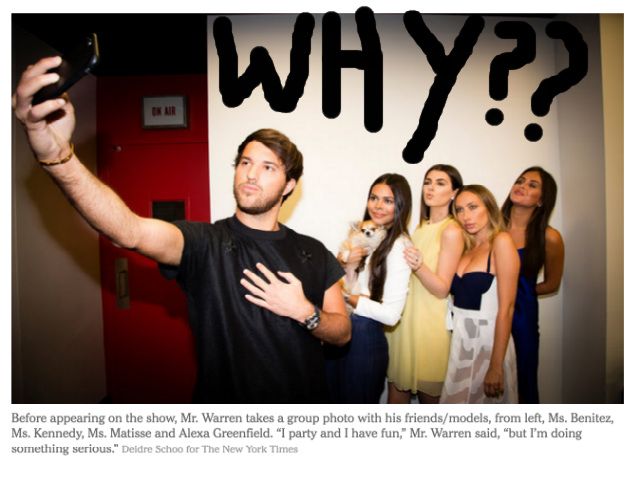 The story follows 23-year-old fledgling fashion designer Andrew Warren and his crew of Millennial hangers-on as they selfie their nights away at various trendy places around the city. Most of them are related to rich and famous people (they're a colorful group that includes the daughter of Robert F. Kennedy Jr. and the daughter of DJ Jellybean Benitez), they all seem to be glued to social media 24/7 (who isn't), and they all seem to be willing to destroy America if it meant their T-shirt line would get a boost during Fashion Week.

The thesis is a nightmare, but it sets up the uh, "stakes" of the story well:

Sparkling in a see-through gold dress also on loan from Dolce & Gabbana was Gaia Matisse, the great-great-granddaughter of the painter Henri Matisse. “Andrew, do you have any pics?” she asked, turning to Mr. Warren.

“I need to look on my phone,” he said, the soft light of the screen bathing his face.

Las Vegas in the 1950s and ’60s had the Rat Pack. In Los Angeles in the ’80s there was the Brat Pack. Now, New York has become home base to a young, wealthy and itinerant group that one may think of as the Snap Pack. For them, taking photos and videos for Instagram and Snapchat is not a way to memorialize a night out. It’s the night’s main event.

Main character Andrew Warren is trying to follow in his grandfather's footsteps (he was a clothing manufacturing titan who founded the Warren Group), so when he says orange is the new YIKES, you better believe it:

Andrew Warren’s parents, Marcy and Michael Warren, worked in the company David founded, and are doing a lot of Andrew’s back-office work, as well as advising him. (They hired a seasoned designer to help execute their son’s vision.)

“We have a top that is in orange, and Andrew can’t stand it,” said Michael Warren, who is 60. “But I tell him, in Atlanta and Dallas they are going to love it, and you need to care about what they’ll love outside of New York.”

Like so many scenesters before them, he and his crew live to socialize and socialize to live, even when that leaves the NY Times writing sentences that make no sense:

Mr. Warren’s Rolodex is burnished, of course, by his agile Snapchat, which Mr. Binn called “more colorful than a Puff Daddy video.”

And we sadly weren't exaggerating about playfully tormenting the live-in help. Imagine you're trying to carry a bunch of trash out while some brats are sitting RIGHT THERE with their faces shoved in their stupid phones, and instead of getting up and helping you, they just shove their stupid phones in your face and start screaming about Bitcoins or whatever:

These seconds-long snippets take viewers to loud, throbbing nightclubs, show the gang smoking on balconies and posing near private jets. A recent scene focused on Lita, the Warren family’s live-in nanny and housekeeper, as she tried to step over doorway gates in place to limit the wandering of the family’s dogs as she carried a stack of empty pizza boxes.

“We’re at the Hampton Classic, get over that one!” Mr. Warren can be heard saying as he trained his camera on her.

Despite such displays, the “Rich Kids of Instagram” moniker rankles Mr. Warren and his clique. “I party and I have fun, but I’m doing something serious,” he said. “Like Rihanna, because she sings, and rappers — no one is judging them for going out. But when I go out it’s like a judge.”

My kind of Pyjamas, you know me so well @dolcegabbana 😉Love Love Love 👏🏼🍒

We haven't even gotten to the best part yet, which would be when the spotlight shifts to the aforementioned Gaia Matisse, the Instagram It Girl who happens to be great-great-granddaughter of Henri Matisse. We should all be so lucky to live our best lives as she is living hers.

Ms. Matisse, who said she is a method actor — “it’s my passion” — graduated in 2015 from New York University, where she studied “the self and other identities,” she said, “the Eastern psychology of ourselves and Buddhism and how the East is so much different from the West and it’s all very interconnected.”

She admitted some ambivalence about her activities on Instagram. “It’s so consuming, it takes so much time,” she said. “I hate the process of the Instagram, the contrast, the saturation, the filter,” she said of editing the pictures. “Then I send it out into the world and may not even ever see it again.”

My main takeaway here—besides the fact that "The Self & Other Identities" would make for a really unique, really artsy sex tape title—is that bit about Instagram. Why would she never see her photos again? If she's posting them, then they're on her account or one of her friends' accounts or whatever—so what the hell is going on here? Does she not know she can scroll back through the photos she's uploaded? Or have we been using Instagram wrong all these years? Is there a secret Instagram for rich people we don't know about? Why isn't Gaia Matisse teaching a class on Instagramming the self and other identities?

As for the rest of the piece, there's a visit to "Good Day New York" to hawk a clothing line, a completely random digression about their dogs, and a paragraph about inspiring cancer patients via Instagram, but I can't even, I really can't even with that shit right now, this is worse than a hamster eating baby corn.

There's no doubt that growing up stupid wealthy in a famous family with little in the way of boundaries is gonna mess any kid up and send them searching for meaning and self-worth in a bottomless pit of materialistic narcissism (not that it excuses them for inflicting their "jewelry line for men’s ties" on the rest of the world). What's really shocking at this point is that it also means you have to put up your guard when one of the most respected newspapers in the country knocks on your door looking for the next monocle trend piece.

I mean, it doesn't make me "want to die," that seems like a wee bit of an overkill. And it's true, without this piece, I never would have discovered I've been using Instagram wrong my entire life.

So just in case Gaia is reading:

PSA: The NY Times has a weakness for self-parodying trend-baiting, masochistic Millennial obsessing, and the perverse lifestyles of the filthy rich. If a reporter with the Real Estate, Style or Weekend sections approaches you about a story, just smile gently and run in the opposite direction. No one is forcing you to become representative of everything that everyone hates about New Yorkers.

#brunch hate reads
#noooooooooooooo
#ny times
#snap pack
#style section
Do you know the scoop? Comment below or Send us a Tip
A new Gothamist is coming! We’ve moved comments over to our beta site. Click here to join the conversation and get a preview of our new website.