A legal challenge to block the American Museum of Natural History's $325 million expansion has been dismissed. However, the plaintiffs are considering an appeal.

Earlier this year, the Community United to Protect Theodore Roosevelt Park sued New York City, saying it overstepped its bounds by allowing the museum to build a 230,000 square-foot wing upon the surrounding park space. This came after the city approved the project last December.

The suit said, "Unless overturned, the determination, in violation of the New York City Charter, would, not only result in the loss of public parkland comprising cherished greenspaces in Theodore Roosevelt Park, but worse, the project, if completed, would cause catastrophic environmental damage to the area, posing a series of life-threatening health hazards to residents of, and visitors to, the Upper West Side of Manhattan."

On Monday, Justice Lynn Kotler of the New York Supreme Court issued a decision upholding an original 1890s statute, which authorized the AMNH to construct multiple buildings in the surrounding park area, and the city's environmental review for the project.

"We applaud Judge Kotler’s decision today affirming that the Museum may proceed with construction of the Gilder Center and that all appropriate procedures in preparation for the project were followed," a spokesperson for the AMNH said. "The expansion will significantly enhance Museum education programs, visitors’ experience, and scientific work. We have also made a significant contribution to the ongoing maintenance and care of the park and will of course work closely with our partners to minimize any disruption throughout the construction project. We are very excited about moving forward and bringing this important project to fruition." 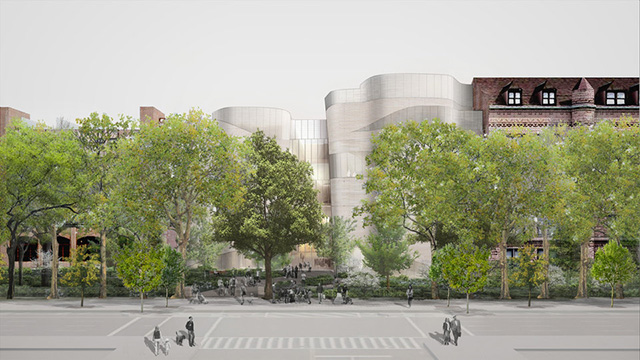 Rendering of the exterior with the Gilder Center (Studio Gang)

A spokesperson for City Law Department said, "We are pleased that the court agreed this project was fully authorized by law and that the City conducted a thorough environmental review. The City looks forward to the museum breaking ground on this important project which will benefit New Yorkers and many other museum visitors."

Bill Raudenbush, from the Community United to Protect Theodore Roosevelt Park, told the West Side Spirit, "We are disappointed with the judge’s decision, as ultimately this means that the AMNH as it stands is entitled to build on the entirety of the park moving forward. We skeptically and eagerly await the AMNH’s promises of little disruptions to the neighborhood both during and after this project and hope they can live up to their promises, but are also evaluating all of our options including an appeal. We hope our elected officials renew our calls for a master plan from the museum as we firmly believe it would go a long way to assuaging concerns about whether or not they are ultimately being a good neighbor with their development ambitions."

According to the museum, 80% of the expansion will house the Gilder Center for Science, Education, and Innovation. Three existing buildings will be removed to limit expanding the footprint by only a quarter of an acre. Construction started in September and the museum is planning a 2021 opening.