"This is a protest, not a parade!" And with that, thousands of lesbians of all ages stepped off onto Fifth Avenue yesterday afternoon for the 24th annual Dyke March.

Held on the Saturday of Pride Weekend ever since the New York Lesbian Avengers started the tradition in 1993, the Dyke March pointedly does not seek a permit for the nearly two-mile walk from Bryant Park to Washington Square, nor are there any sponsors for the event. And though NYPD did, in fact, close off half of Fifth Avenue down to 23rd Street, and the entire thing after that, a dedicated crew of Dyke Marshals provided an extra layer of security for the marchers, blocking traffic at each intersection and running interference against the occasional harasser.

Despite the political seriousness of the event, the atmosphere was more festive than anything else, with loud out-and-proud chants; at least two drum corps, including the always-excellent Batala NYC; a strong message of love over hate; plenty of moms with their kids, and rampant public displays of affection. 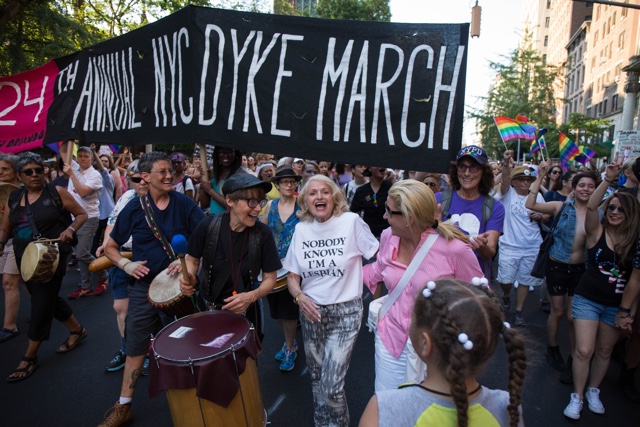 The most poignant moment of the day came when the entire march stopped at around 20th Street for an emotionally devastating minute of silence for those killed in Orlando, every woman completely quiet, two fingers held in the air. Shortly after that, a loud cheer went up at the front of the march, as Edie Windsor, a pivotal figure in the overturning of DOMA in 2013, joined the demonstration for the final few blocks to the park.

As it does every year, the fountain beckoned In Washington Square, and several dozen marchers ended the day by splashing and laughing in the cool water. Click through to check out photos from throughout the event.

#dyke march
#pride 2016
#pride week
Do you know the scoop? Comment below or Send us a Tip