"I've hated my body since I was 16," said 26-year-old Winn in Times Square on Friday afternoon, right after she had stripped off all her clothes on the pedestrian plaza. "So I'm trying to help get more realistically natural bodies out there into 'the ether,' and maybe someday others won't feel so bad about the way they look."

Winn was just one of about 100 people who participated in Body Notes on June 9, an all-nude art project spearheaded by the tireless champion of free-expression and positive thinking, Andy Golub.

This was a bit different than Golub's annual Bodypainting Day (happening this year on July 22, in Washington Square Park), when dozens of different artists use naked models as a canvas, creating something unique on each person. At Body Notes, the design of each body/art work was the same, and then every model added the phrase or motto of their choosing to their chest.

Expressions of self-acceptance, self-empowerment, and positive thinking were common themes, such as "Bravery Is the Strength We Never Knew We Had", "Decolonize This Body", and, as one couple from Philadelphia put it, "Live Today" and "Every Moment Matters". Golub said he was inspired by the "Subway Therapy" displays that emerged after the 2016 presidential election. 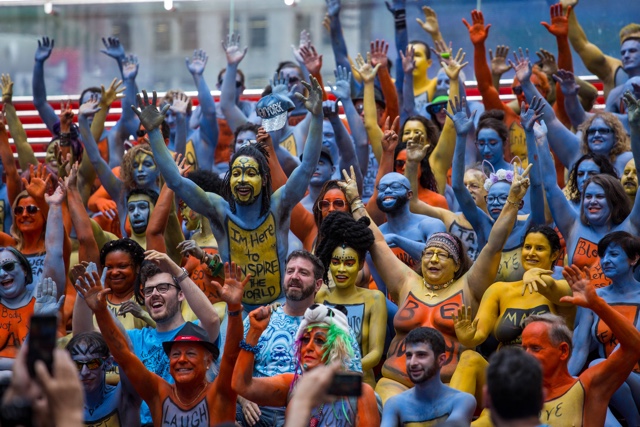 The models themselves were a mix of all ages and body types, and their motivations for participating were equally varied. One man said that, after his body nearly withered away while treating stage four cancer several years ago, that this was a way for him to express his gratitude for his regained strength.

Thomas, a 24-year-old Brooklynite, just "wanted to try something new. It feels nice, I feel good, I feel confident." And a young woman said she had mixed feelings while standing around nude, unable to completely shake the anxiety she often experiences in public because of constant harassment and cat-calling from men.

Golub was arrested for one of his body-painting events: As we reported in 2015, "[W]ith the help of the NYCLU, Golub successfully established that full nudity was legal when it was for the sake of artistic expression." He said at the time, "We've always been getting attention, but now it's a different kind of attention. I think most people are totally cool with it, because they get what it's about. But a lot of other people feel a little riled up over the whole idea of nudity, which is one of the reasons I made sure to get out here."

The event lasted only a few hours, starting in a pair of painting pens set up around the new Ice & Vice kiosk. After everyone was covered and a million photos were taken, the giddy naked band marched up to the red steps in Duffy Square... where a million more photos were taken. Both places were obviously packed with tourists, but everyone seemed to take the strange parade in stride. And as Gabe, an 11-year-old tourist from Florida, was quick to point out—unprompted, in fact, as if he was well-studied in the matter—"it's totally legal to do this."

#andy golub
#body notes
#naked people
#Times Square
Do you know the scoop? Comment below or Send us a Tip