NSFW Photo: Sleepy Straphanger Scrotumspreads On The A Train

Manspreading enthusiasts and defenders often argue that it is necessary—nay, biologically imperative!—that men be given sufficient space to let their junk breathe. Now one sleepy spreader took that to the next level by hanging brain on the A train this week.

NSFW WARNING: it may look like there's a crumpled old sock popping out of the photo below, but that is indeed a solitary testicle taking a moment to wave hello to the straphanger sitting across from him.

FINAL WARNING ABANDON ALL HOPE YE WHO SCROLL FURTHER DOWN

OKAY LET'S DO THIS 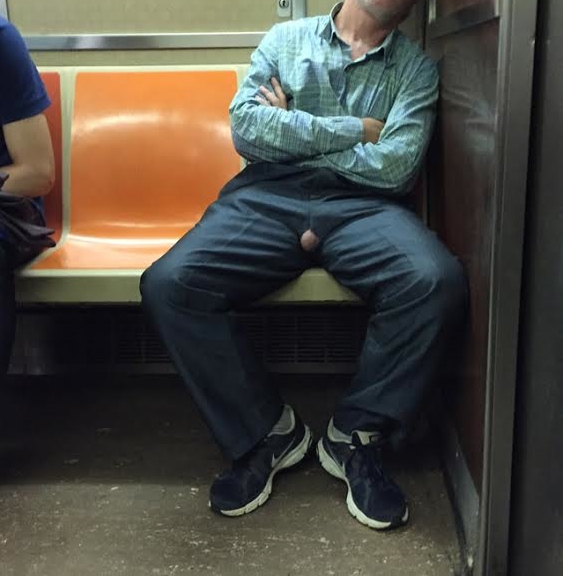 Witness Jason Finestone said he spotted the scrotumspreading around 6 p.m. on a downtown A train on Monday, June 15th; he added that he now suffers from "PTSD (Post-Testicle Stress Disorder)." We'd hasten to point out that unlike many of the subway pervs who frequent our mass transit system, it is unclear whether this man was fully aware of his exposed friend.

So in the public interest, we offer this five-step process for men (especially those who tend to wear pants with holes in them!) to ensure that they don't wake up to find that their testicles have been testing the limits of good taste.

Update: Finestone explained the circumstances around the photo: "I got on at 34th Street, and he was already on the train," he told us. "I was standing by the door on his side until the person sitting across from him suddenly got up and moved. I took their seat. It wasn't until we had already left 14th Street that I looked at him, at which point I had a good idea as to why the previous passenger had changed seats."

We asked him whether he got the impression that the ball may have accidentally slipped out: "Unless the guy was completely passed out and numb, I have no idea how he wouldn't feel his own testicle squeezing through a small hole in his pants, so maybe it was intentional," Finestone said. He noted that the man crossed his legs at one point as more people got on the train: "But then why would he have crossed his legs? Why would anyone with a hole in the crotch of their pants go commando? And then manspread on a rush hour subway?"

#a train
#ballspreading
#hanging brain
#scrotumshowing
#subway
#subway etiquette
#why god
#original
Do you know the scoop? Comment below or Send us a Tip