NSFW: How LUST Restored My Faith In NYC, Parties, And Hot Summer Nights “I feel like this is what Sex and the City promised me New York would be like,” said Ruthie, a photographer for Bushwick Daily. We were leaning against the bar, sipping champagne and watching a woman in glittering nipple tassles arrange a pile of fried quail wings on a man’s crotch. He was lying supine on a low table, naked but for a pair of flesh-colored underwear, a jeweled necklace, and the serene expression of a person totally at ease with his current place in time and space.

A couple kneeled on the pillows beside him, dipping their wings into an orange sauce smeared across his thighs. I wondered if he was ticklish. 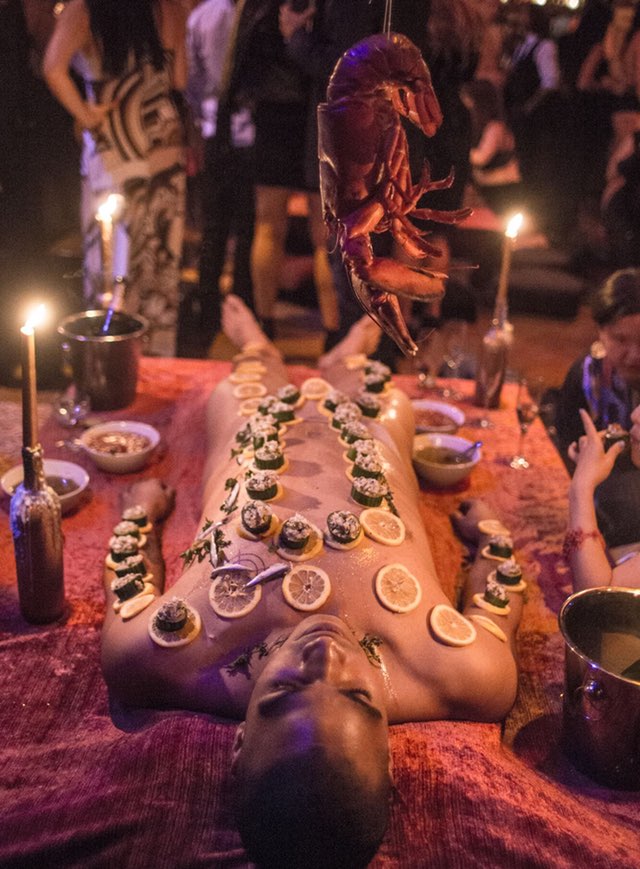 As the line formed outside the door in Bushwick last Thursday, I prepared to entertain my worst expectations of the night ahead: forced eroticism, creepy voyeurs, cheesy double entendres. A man in line in front of me wore a leather corset over a dress shirt and slacks. One of the night’s many raven-haired performers paraded by in garters and a black leather push-up bra, returning with a man on a leash in tow. In my time as a skeptical New York party attendee, I have found that the best ones are, of course, serendipitous, the perfect confluence of illegality and chance, the right temperature, the right drugs and the right people. To manufacture such a milieu is futile, like trying to convince a cat to love you. Or so I thought. 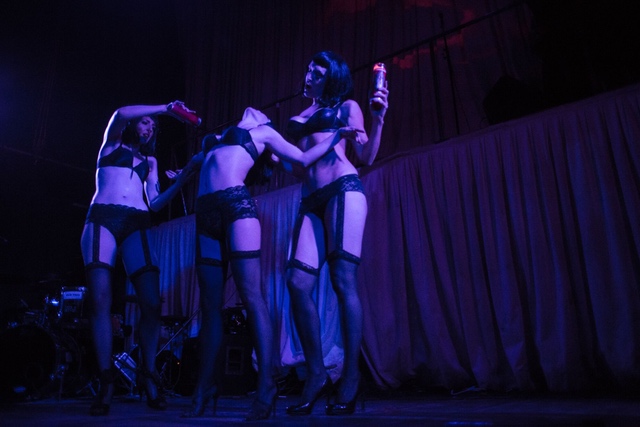 A party’s space is one of the critical elements of its success, and House of Yes hits all the marks with precise aplomb. A lush backyard garden, an ample ballroom/dance floor, a bathroom dripping in baroque fixtures and gold and pearls, like if a disco ball fucked a unicorn on the queen’s chaise lounge. This was my first time there, and I guess I won’t always find a naked woman reclining in a clawfoot bathtub filled with milk, her hair rolled in beer cans, or, deeper inside, tables upon tables of perfect bodies covered in finger foods like sushi and oysters, flanked by cushions and bottles of champagne plunged into ice buckets. I peeled a slice of steak from an ankle, trying to orient myself in this strange, perfumed world, where prudery, judgment and undergarments were best left at the door.

A good party hews loosely to some degree of narrative structure, led by an invisible hand that gently guides, but never forces. At most parties where attendance requires a ticket, that narrative is rendered too strongly—a change in music before you’re ready, the insistence that attention be drawn to this or the other thing, which can wreck a good thing already in situ. The narrative of LUST is both vivid but subtle—sex, in case you didn’t get it—but allowed guests to be as involved or passive as they liked. After a couple of hours, the human trays were relieved of their food; the cushions and tables were cleared; and the endless, flowing champagne, tragically, was locked behind a cash bar. But other delights were afoot. It was time to move on, and the invisible hand was working its magic. 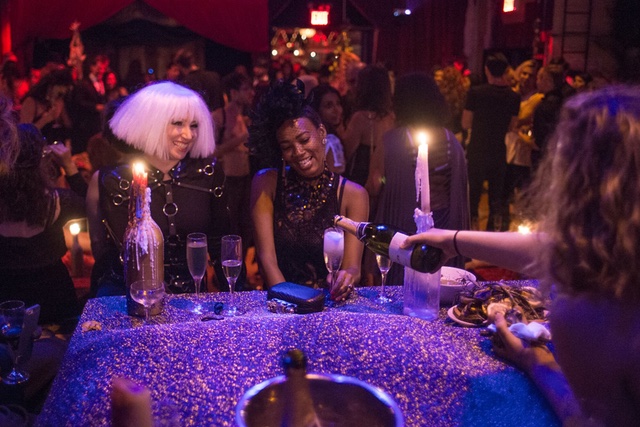 Around 10 p.m., a singer appeared on stage and began belting out a pop tune, and I briefly fretted that the freewheeling party atmosphere would be usurped by the black hole of an unasked-for concert. My worries quickly abated when a pair of muscular hands descended upon my back. Earlier, I’d stripped off my media sticker after another reporter (who was not wearing one) told me she’d been led to a corner and passionately made out with (with her consent) by a shirtless, muscle-bound man in a bow tie. I’d been promised an immersive experience, and, you know, I wanted to blend in OK?

Sure enough, the hands showed up, and it’s a testament to the safety of the space that I could barely be bothered to half turn to confirm what I’d already suspected: That they belonged to a tall, shirtless Professional (waiter? Hired sexy person?) with skin that felt like peaches (confirmed when his bare chest brushed against my back). I’ve combed my mental thesaurus for a better word, but Michael could only be described as “strapping.”

“What is your workout regimen?” he asked as he massaged my shoulders, and my eyes fluttered open. I hadn’t noticed they’d been closed.

“As little as possible,” I joked. Earnestness in the face of physical perfection is a feat I find impossible. Michael said nothing, his hands continuing to work over my skin. I sighed, conceding that I occasionally unearthed myself from a pile of buffalo wings for a light jog.

Michael told me that he’s usually a bartender, mostly at private parties, mostly of the gay variety. Unsure what further conversation I could possibly muster with this chiseled forest prince, I excused myself, saying I had some very pressing business to attend at the bar. “OK,” he said, “I’m going to creep you on Facebook.” I grinned sheepishly and fled. 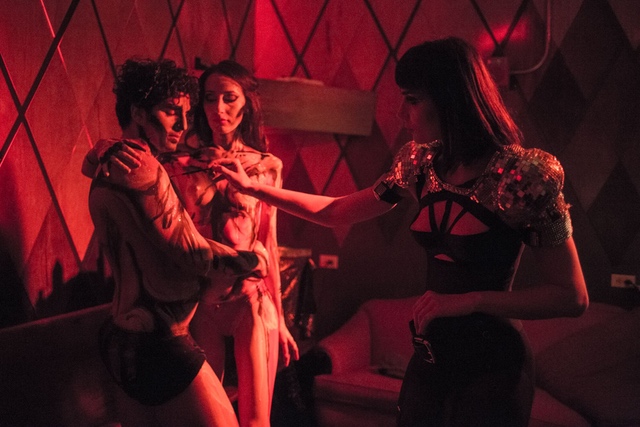 Fresh drink in hand, I wandered to another of the hall’s seemingly endless corners and watched as a brawny mustachioed man bound his buxom, vampy companion with rope, her head lolling with what appeared to be genuine pleasure as he twisted it around her body. From there I allowed the pink puff of my champagne cloud to carry me to the next room, where an artist was painting bare chests. On an adjacent bed of pillows, bodies had amassed in nests of limbs. An Asian woman took turns making out with the blonde woman on her left before turning to make out with the man on her right.

Outside, I found our photographer, Sai Mokhtari, and she and I flashed our media stickers to gain access to a sort of elevated aerie, atop which sat something I have never personally seen in New York: a clean, functioning hot tub. It was filled with naked partygoers, a fact that at this point seemed almost a given.

Later, I perched with Sai on a roof just above the hot tub, my hair still damp from my earlier dip. We’d been chased off moments before by a well-meaning House of Yes employee who forbade us from tottering around up there, but he did allow us to sit, taking in the susurrus of the bubbling water merging like a stream with the festivities below. It was around 2 a.m., and though both Sai and I had intended to leave hours earlier, we were both wise enough to recognize inimitable good vibes when we found them.

It was one of those sublime New York nights, the kind produced only in early summer when the outside air temperature demands neither the addition or removal of a light sweater, like maybe you don’t have skin or even corporeal form at all, that you’re just a loose gathering of perfectly calibrated molecules, lightly buzzed and quietly, sedately content—content at the weather, content at the city, content to be reminded that parties like LUST actually exist, the scintillating gems on the neck of a man covered in fried poultry.

#house of yes
#life advice from lauren evans
#lust
#longform
#original
Do you know the scoop? Comment below or Send us a Tip