There is a rush of music that sweeps you up within the first minutes of Interstellar, a crescendo of notes that you barely notice before that moment, which hit their blaring peak as Matthew McConaughey stares out the window at the barren landscape. It's a very Andrew Wyeth-looking apocalypse that he's taking in, as humanity's survival is threatened by a global dust bowl and crop blight brought on by global warming. For the human race to survive, a new home needs to be found.

Christopher Nolan's epic cosmic odyssey, which is one the most realistic sci-fi and space films ever, has been a calming force for me since I first saw it, about ten to twenty viewings ago. That music—courtesy of Hans Zimmer—can instantly soothe me, even when it hits an alarming, air raid peak. It's kind of like how the nature sounds comfort Romilly once the Interstellar astronauts are in space—the noise is a steadying, familiar force in an unfamiliar scenario.

Recently I wondered why this movie is so soothing to me, as it apparently does not have that effect on everyone. Let me check my texts from 2015... 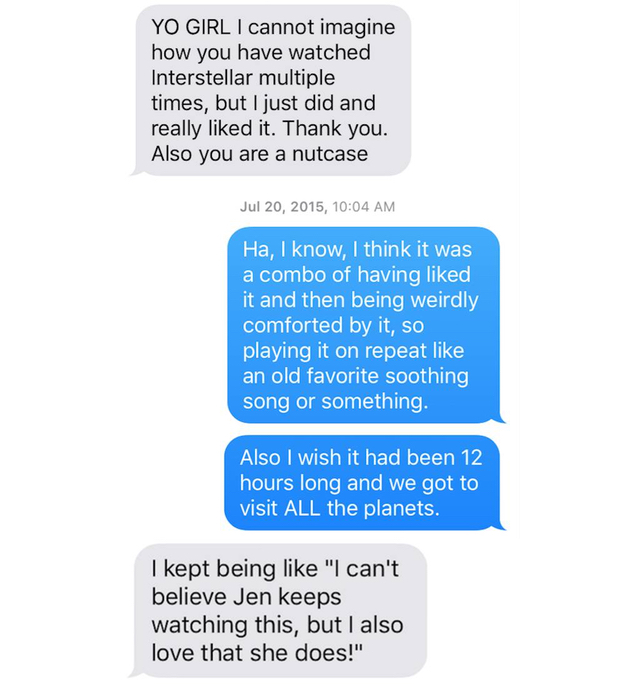 I've been holding another viewing close at hand, like the last pill in a stash of anxiety medication. I wasn't sure if its power would diminish if overused, and I knew I would need it as we closed in on an era of Donald J. Trump in the White House. Recently I hit play again, instantly realizing it was more powerful than ever, now that a climate change denier is getting his hands on nuclear weapons. 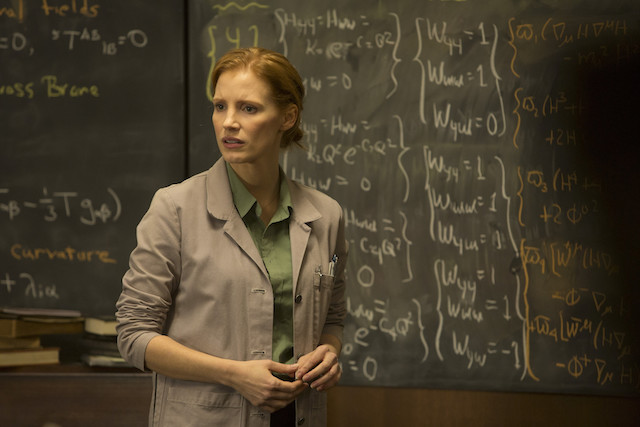 The reason the movie is so comforting is because while you start out staring at the dirt, you turn your gaze back to the sky. It offers hope in the form of solutions and plans, through reason, and through brave characters who aren't giving up. Science and facts are there to solve your problems, as is an open mind, and there will never be anything fictional about that—if you understand the world you are in, it may terrify you more, but you also have a better chance of survival when it's being destroyed. Maybe?! Anyway, science helps... there was a time I would read physics books on planes, to calm any nervousness I had about flying, until one day I just didn't need them anymore. Flying made sense.

When books are moving off of young Murph's bookshelf at the start of the movie, she refers to a "ghost," at which point her father instructs her: "You wanna talk science? Don’t just tell me that you’re afraid of some ghost. Alright? You gotta go further, you gotta record the facts, analyze, get to the how and the why, and present your conclusions." This is an unwieldy mantra, but one worth holding on to. Before you freak out, figure it out.

If that doesn't help you, maybe Michael Caine reciting Dylan Thomas will?

"Do not go gentle into that good night... Rage, rage against the dying of the light," his character Professor Brand tells the crew, as that same blaring soundscape built by Zimmer climbs back in:

Ultimately, the film is an incredibly ambitious affirmation of divine consciousness transcending time and space, manifesting itself through human evolution. When McConaughey is floating in the Tesseract communicating with his daughter outside time and space, you can see his expression of profound joy as he realizes that "they" is actually "us." This resolution was the result of Nolan and astrophysicist Kip Thorne working beautifully together to thread big ideas about meaning and existence through a relatable human story of love and sacrifice. And science is what gives the whole endeavor its foundation of hopefulness in the face of global dread.

I recommend watching it (just look at all this inspiration you'll find)—it's the best kind of escapism, it's the kind that will help you because it's not really allowing you to escape. It's forcing you to ask and answer, "What happens now?"

#interstellar
#cinematic xanax
#original
#space
#science
Do you know the scoop? Comment below or Send us a Tip