This weekend, a Chelsea art gallery played host to DaddyWillSaveUs, a self-proclaimed "pro-Trump art show" in which some of the more artistically-minded members of the Alt-Right poured pig's blood all over each other in celebration of Trump, or something. The pig's blood was part of Milo Yiannopoulos's performance piece, which was a muddled commentary on people who had been murdered by immigrants.

Toward the end of the event, some of the "Proud Boys," members of Gavin McInnes's fraternity of "western chauvinists," went to bring the blood tub outside and dump it into a sewer grate. They missed however, pouring much of the blood on the street, and then apparently gave up—leaving the tub, which was still filled with blood, there for unsuspecting strangers to come upon.

"So I was walking down 18th Street on Sunday morning when I saw what appeared to be a bathtub full of blood," Kate Burch, who took the photos above around noon Sunday, told us. "I took some pictures because it was weird—then I saw your Trump art show article and realized it was the same bathtub! So yeah, in addition to being horrible, the pro-Trump art show crew are improper-bloody-bathtub-disposing-bad-neighbors."

It is believed the tub was there at least through Monday—large metal items such as bathtubs aren't collected until recycling day, which is Friday for that neighborhood, so that rules out the city picking it up. The Alt-Right members did not return to the gallery until Monday night to remove their work from the gallery; as of Tuesday evening, the tub had disappeared from that location. 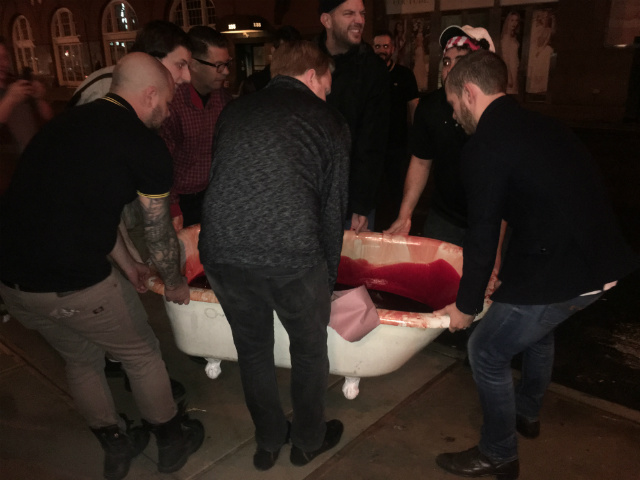 Laura O'Reilly, the owner and founder of Wallplay (which rented the space in question), told me that she had not been prepared for the amount of blood involved in the event beforehand: "The blood splatter performance element was not made clear to me," she said. "Lucian's photos with the Trump twinks were the only visual reference I was given to judge the show. To me, when I saw that, I thought it was more satirical farce, not meant to be taken literally. I'm not going to say they tricked me, that'd be a cop out, but this all happened in 48 hours very quickly...and we don't vet things as strictly when someone's just paying a general rental fee."

O'Reilly, who noted that she was neither the curator or producer of the show ("It was a rental space, the gallery had nothing to do with it"), said that once it became clear what the event really was, she still felt it was important not to shut it down. "It was a very bizarre room of people," she said. "The darkness in the room was chilling, in my opinion. I feel like discourse and discussion through art is a major part of what I believe in. Even though I don't agree with what they were promoting, I didn't have it in me to shut them down," she continued. "I ended up in an uncomfortable situation I never meant to get in the middle of. It was disturbing, I'm still a bit traumatized."

She noted that the gallery had feminist Natalie White’s exhibition in another room at the time, and though the Alt-Right group wanted to use that space as well, they weren't allowed to do so. "Sometimes being stretched to really have to see the other side and look them in the face is important, and it was a big indication of what's going on in the rest of our country that we don't see very often here in NY," she said. "I think it's important that everyone gets to express themselves. Whether I think it's appropriate for people to spray blood on gallery floors and reporters...I think that's highly offensive and disgusting. But I think these guys made themselves look insane. It hurt them more than it helped them."

Lucian Wintrich, the organizer of the art show, told us he was satisfied with the event: "I was very happy with the turnout and reactions in general, there was such incredible diversity in the audience," he said. "I met an elderly couple who were art historians, they said they had never seen anything like it and were thrilled. Overall, I think everyone had a wonderful time, and we were able to provide a show for people who otherwise are outlaws of the art scene."

He had no response when asked about the whereabouts of the blood tub.

#alt right
#art
#blood tub
#Chelsea
#daddy will save us
#donald trump
#original
Do you know the scoop? Comment below or Send us a Tip