New Yorkers can use any distraction they can get from the numbing delays of our daily commutes, which is probably why we eat it up whenever a pair of goats decides to hitchhike along the N train tracks. A little bit of whimsy can go a long way, as photographer Adrian Wilson presumably knows—he decided to put a chandelier up on an R train this past weekend.

Wilson was visiting a friend for brunch in Brooklyn Heights on Sunday when he found the chandelier. "I thought it was a perfect gift for my daughter who is moving into a new apartment today," he said. It was filthy though, so he decided to take it home to clean and fix it first. When he got on the R train around 4:30 p.m., he decided to hang it from a pole all the way from Canal to 42nd Street where he had to get off. 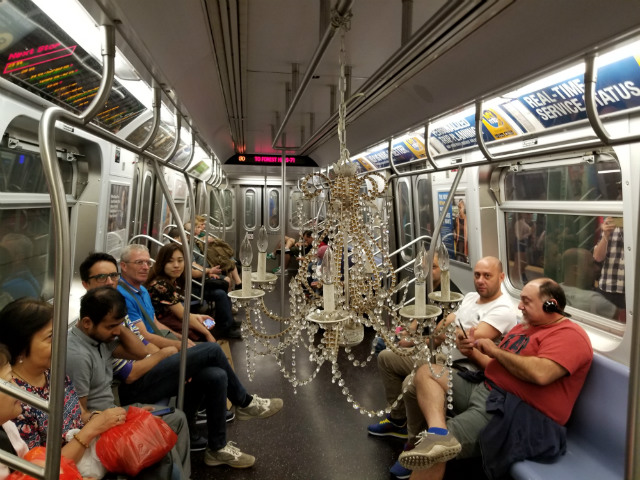 "The Italian tourists [sitting] around me in the video thought it was great and took the photos and videos of me," he said. "Lots of people took photos and more importantly, smiled. Best comment was, 'You travel light.'"

Wilson, who is a photographer who shoots for the likes of Apple and Victoria's Secret, previously launched The Inutilious Retailer on Ludlow Street in 2015—you might remember it because it was the store that sold nothing (although Wilson did give customers his art, which was made from clothing "purchased at stores which have a history of copying fashion designer’s work").

"I would have loved to leave it up there, but my daughter comes first and also of course had to make sure it didn't cause any damage," he said, adding that he ended up cleaning it in his dishwasher when he got home. 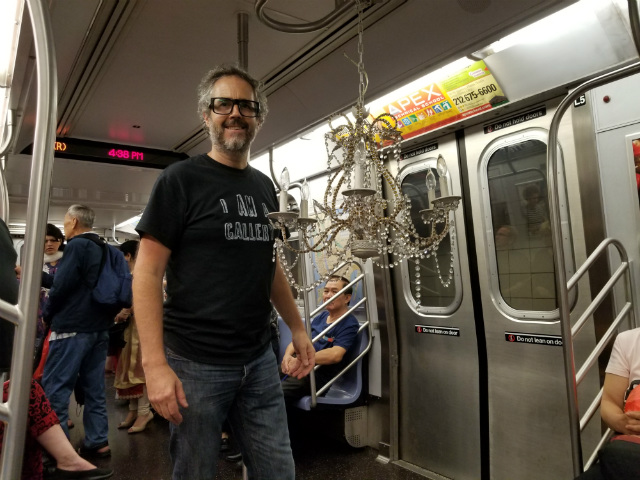 Check out a few more videos from Wilson's Instagram.

SWIPE➡️ Found a chandelier. Installed it. Lit up people's faces.

#chandelier
#chandelier train
#MTA
#r train
#subway
#train
#original
Do you know the scoop? Comment below or Send us a Tip