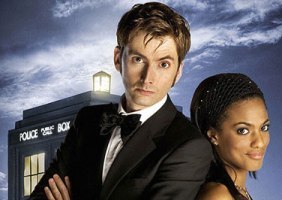 If you are looking for some good television (you know, the kind with actual scripts), BBC America delivers a one-two punch on Saturday night with the season debuts of two British sci-fi shows – Doctor Who (8:00 p.m.) and its spin-off Torchwood (9:00 p.m.). The episodes of Torchwood are a bit fresher, airing a few weeks ago in the UK, while the Doctor Who episodes aired last spring over the pond.

Now, if your only exposure to Doctor Who is the campy 1960s through 1980s version, you’ll find some basic similarities. The Tardis is still the same on the outside and the mix of sci-fi and humor is still there, but you’ll also find that along with the special effects, the writing has improved remarkably over the show’s evolution. 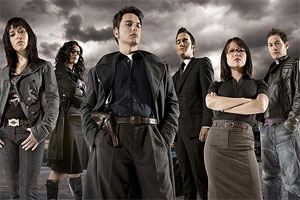 Torchwood was spun-off from Doctor Who and deals with the Cardiff branch of a secret British sort-of- über-governmental agency that deals with things supernatural and extraterrestrial. It's more targeted at the adult audience, with language (a lot of it edited out for airing on the prudish side of the pond) and some sexual themes.

Both are brilliant shows and compared to the strike-filler programs put out by the networks, they look like Shakespeare. And these shows are worth sampling for people who don't think they are sci-fi fans - they are light years from Star Trek.

14th Annual Screen Actors Guild Awards (Sunday, 8:00 p.m., TNT, TBS) This awards show actually has been written by WGA writers (thanks to a bit of union solidarity) and may be the only full on awards show to air this season.

Images of the cast of Doctor Who and Torchwood via the BBC.