A look at some noteworthy television this week:

Mr. Warmth: The Don Rickles Project (Sunday, 8:00 p.m., HBO) A look at America's favorite insult comic and last surviving member of the “Rat Pack”, the octogenarian Don Rickles from director John Landis. Everyone from Chris Rock to Bob Newhart to Clint Eastwood to Sidney Poitier talk about the comic.

1968 (Sunday, 9:00 p.m., History Channel) 1968 was a turbulent and tragic year and Tom Brokaw not only lived through it he reported on it for NBC on the west coast. In this look back the veteran reporter interviews artists (like Bruce Springsteen), newsmakers, protesters, and ordinary people who lived through the year and the year’s impact on where we are today. Plus you’ll get to see Richard Nixon say, “Sock it to me?” Our only complaint is that we wish it was a bit longer.

Tin Man (Sunday-Tuesday, 9:00 p.m., Sci Fi) No, it is not the 1987 Barry Levinson movie about aluminum-siding salesmen in Baltimore (that was Tin Men) but like that film this mini-series has Richard Dreyfus in it. Unlike that movie this is an adaptation of The Wizard of Oz that tries to be edgy with Oz reinterpreted as The O. Z. 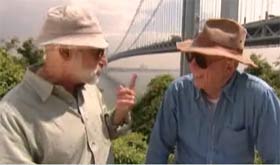 Walk Around Staten Island with David Hartman and Barry Lewis (Monday, 9:30 p.m., WNET 13) Staten Island finally gets its walk around with David Hartman and historian Barry Lewis. The pair’s unique mix of the contemporary and the historic provides some insight into the city’s least populated and often neglected borough. One bit of warning, it is a pledge special, but it is better than Doo Wop.

Sand and Sorrow (Thursday, 8:00 p.m., HBO) George Clooney produced and narrated this documentary about the Darfur.

The 10 Most Fascinating People of 2007 (Thursday, 10:00 p.m., WABC 7) This is the 15th of Barbara Walters annual look at who she considers the most fascinating people of the year. Eight have been revealed with the final two to be named on the show. Most of them are far from fascinating, like the Beckhams and Justin Timberlake, with one, Katherine Heigl, basically being a plug for the network’s Grey’s Anatomy. Only three come close – Bill Clinton and Tom Anderson and Chris DeWolfe from MySpace.

Movies Rock! (Friday, 9:00 p.m., WCBS 2) On its surface it sounds like a good idea – a look at the relationship between movies and music. However, this seems more like an awards show with performances by various musical acts from Beyoncé to John Williams and the involvement of some actors. Maybe it will be good, but it is Hollywood we are talking about.

Transit Transit (Saturday, 3:30 p.m., WNYE 25) This month the MTA's homemade TV show celebrates the holidays with everything from cookie baking to a visit to the holiday displays and events around the city to singing transit workers to a song about the F train sung by the Young People's Chorus. It is unintentionally funny.