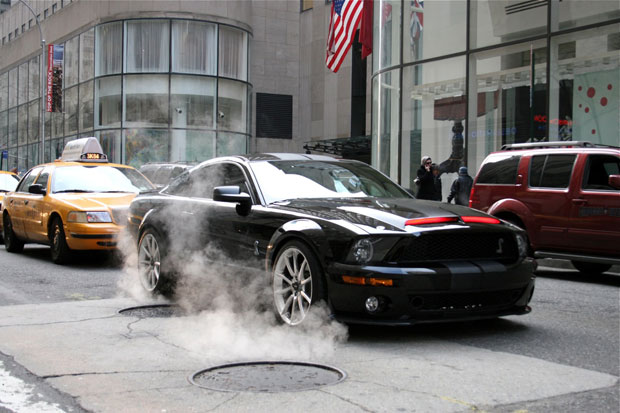 Thankfully NBC’s new version of the classically cheesy 1980s show Knight Rider (Sunday 9:00 p.m., WNBC 4) is not a remake, but a continuation of the old in this two hour movie/back door pilot. Of course, this means there are some changes, such as the presence of David Hasslehoff being reduced to a cameo, the two leads are ex-soap stars (the way the Hoff was), and horror of horrors KITT isn’t a Trans Am anymore thanks to a deal between NBC and Ford that product places a Mustang as the talking car (and Trans Ams aren't made anymore anyway). It has all the makings, save for being relatively Hoff-free, of being so bad it is good.

You’ll probably be asking some of the following questions about the show:
Will it be any good?
Probably not, but anything is possible.

Will the fact that Val Kilmer replaced Will Arnett as the voice of KITT reduce the camp value?
Probably, and it means instead of mentally cuing up Europe’s The Final Countdown and thinking of Arrested Development tie ins when KITT talks, you’ll be repeating the same quote from Top Gun – “You can be my wingman any time.”

Will it be a two hour Ford commercial?
Given NBC’s strange ways of trying to save and make money, it is a strong bet.

Should I just dig up those spoof Turkish Knight Rider oil company adverts?
Yes even if you do watch the show. They are absurdly funny even if you don’t speak the language.

Also of note this week:
Nature: Arctic Bears (Sunday, 8:00 p.m., WNET 13; Wednesday. 8:00 p.m., WLIW 21) Did you know that polar bears are descendents of grizzlies? This and how they are struggling with the changing Arctic climate are all revealed in this episode of Nature.

Dexter (Sunday, 10:00 p.m., WCBS 2) CBS wins a prize for getting the Showtime crime drama about a serial killer who works for the police cleaned up enough for viewing on the prudish place that is American network television. Hopefully the show won't suffer too much.

The Price Is Right Million Dollar Spectacular (Friday, 8:00 p.m., WCBS 2) This is Drew Carey’s first go with a prime-time TPIR special. So if you haven’t been home to see how he has filled the shoes of the great Bob Barker, this is your chance.