(Not All) Women Love Sex 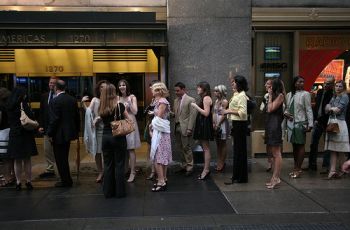 Hollywood is apparently shocked that women can affect box office sales; Variety notes that after Sex and the City opened this weekend to the tune of $55.7 million, it shattered "decades-old thinking that females -- particularly older ones --can’t fuel the sort of big opening often enjoyed by a male-driven event pic or family movie." Way to go ladies?

The NY Times reports that the romcom's success was mostly thanks to the fairer gender, with 85 percent of the ticket buyers on opening night being women (Warner Brothers reports that more men began showing up over the weekend, however).

“It is kind of mind-boggling,” Sarah Jessica Parker, the “Sex and the City” star, said in a telephone interview from her Manhattan home on Saturday.

“We are thrilled and humbled that the audience came out. I am so excited about the possibilities for movies about women."

The powers that be are already in talks about a sequel -- but will it just turn into a big screen version of The Real Housewives of New York? Just as women take a step towards changing preconceived notions of their role in keeping Hollywood afloat on opening weekends (which is so important), the movie itself takes a giant step back for womankind! Jezebel reports back from the theater with a scathing review, characterizing the silver screen version of the foursome as "fools," "rich bitches," and "assholes" who are self-centered, rude to their help, and full of unflattering attitude.

The perfect accessory to all the frenzy is a story about SJP herself; seems her dress from the New York premiere wasn't very original after being worn out by others (including Lindsay Lohan, no less) despite the designer telling her that wouldn't happen. While she called it "unethical and disappointing that they would allow the dress to be worn again," Gawker counters by pointing out the unethicality of overselling a movie premiere to fans in order to create a nice PR buzz.

Photo of the New York premiere line via TrespassersWill's Flickr.

#box office
#opening
#opening weekend
#sarah jessica parker
#sex and the city
#sjp
#women
Do you know the scoop? Comment below or Send us a Tip
A new Gothamist is coming! We’ve moved comments over to our beta site. Click here to join the conversation and get a preview of our new website.