The media empire responsible for Northside Festival and Brooklyn Magazine appears to have crumbled, less than a year after it was revealed that Northside Media Group CEO Daniel Stedman was allegedly withholding tens of thousands of dollars in wages to dozens of former employees.

According to the Parks Department, Northside Festival—the CMJ/SXSW-inspired showcase of music, film and "innovation" that's taken over Williamsburg and Greenpoint each June for the past decade—did not apply for permits this year. Ditto for SummerScreen at McCarren Park, which Stedman launched in 2005 and claimed as the "longest-running outdoor film and music series" in the borough. The glossy quarterly publication Brooklyn Magazine, which laid off most of its staff last year but continued to publish online content by Stedman and a few others until early February, seems to have gone dark as well.

Multiple inquiries to Stedman were not returned, and records show that he removed his name from the company's public LLC listing last month. A phone number for Northside Media Group has been disconnected. There is no online band submission form for Northside Festival, though the website promises more information on 2019's fest is "coming soon."

Meanwhile, Stedman, the boss and self-described "cultural engineer" of the multi-platform business, has continued to withhold payment to some employees and former freelancers. In at least two cases this year, stiffed workers have won judgments in small claims court. They say that Stedman was a no-show at those hearings and that he has so far refused to accept certified mail sent to his home and office compelling him to pay up. (His listed address remains a $1.7 million brownstone in Prospect Heights).

"Danny has taken ghosting to a whole new level and has proven he's a con artist. It's not shocking that the company has quietly disappeared," said Kat Lam, a visual artist who's owed $1,200 for a Northside Festival mural she painted last year. "I was under the impression that Northside (and Danny for that matter) was on a mission to support Brooklyn and its artists. Instead, he and his company have crafted a habit of scamming us." 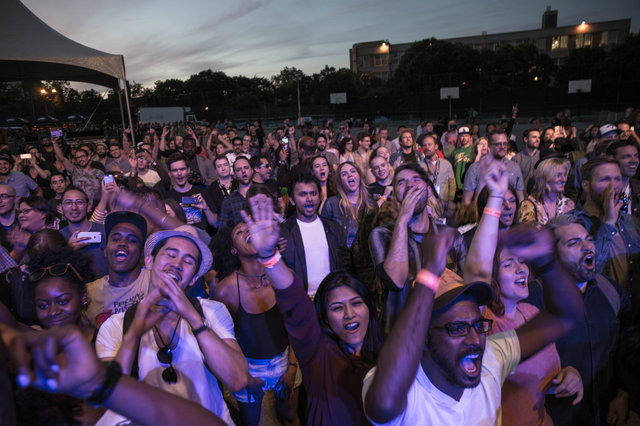 Emails provided to Gothamist last summer show that Stedman assured former employees that they would eventually get paid, promising to "get us through this, if I don't die of exhaustion." Reached for comment at the time, he insisted that things were more complicated than they seemed. "My candor is a strength and a weakness, and I'm starting to lose faith in the degree of honesty that I have treated everybody with," he said. "It is clearly doing me a disservice."

Those who worked closely with Stedman describe him as a headstrong and charismatic manager unprepared to run a far-flung events and a publishing operation. His introduction to the business came after his brother Scott enlisted his help in running the now-defunct L Magazine. (Scott Stedman eventually left the company, and was recently hired as Chief Strategy Officer of the Yes and Company; he did not respond to a request for comment.)

Sarah Zorn, who worked for Stedman as Brooklyn Magazine's food editor for six years, told Gothamist last summer that she was forced to go on Medicaid as a result of the $9,000 in wages she was still owed. She won a civil suit for the full sum plus interest in February, but says that the ruling "doesn't remotely guarantee I'll have any success in collecting it."

"I have no doubt I'll be spending as many years chasing down income rightly owed to me, as I did faithfully working for him," Zorn told Gothamist on Tuesday. "At the very least, I hope this is a lesson to all potential future partners, sponsors, vendors and employees. This man is a scam artist. RUN."

#danny stedman
#northside festival
#northside media group
#scott stedman
#summerscreen
#the day the music died
#We are a company born by catalyzing Brooklyn's creative community and bringing it to the world
#original
Do you know the scoop? Comment below or Send us a Tip