While earth-bound New Yorkers ran for cover under deli awnings during yesterday's rush-hour downpour, one baby hawk, soaking wet and pitiful, got its claws stuck in a window screen in the East Village. The gusts were just too much for its baby wings.

Jay Reno, who works for a tech startup and lives in Fort Greene, was biking past Bibi Wine Bar on East 4th Street around 6:30 last night, when he noticed two women with cameras staring up at the third-floor window above the bar. It turned out they were both bird watchers, who had been tracking the hawk from its nest on Avenue A for some time.

"The rain had knocked the baby hawk out of the air, so it put its talons in the screen window," Reno learned. It was a sad scene. "It wanted to fly away, but it also seemed exhausted, and its wings were really wet. You could see its fluffy baby feathers."

"It was silent and its beak was halfway open, like it was scared," Reno said. "It looked like it was saying 'help,' but it wasn't making any noise." 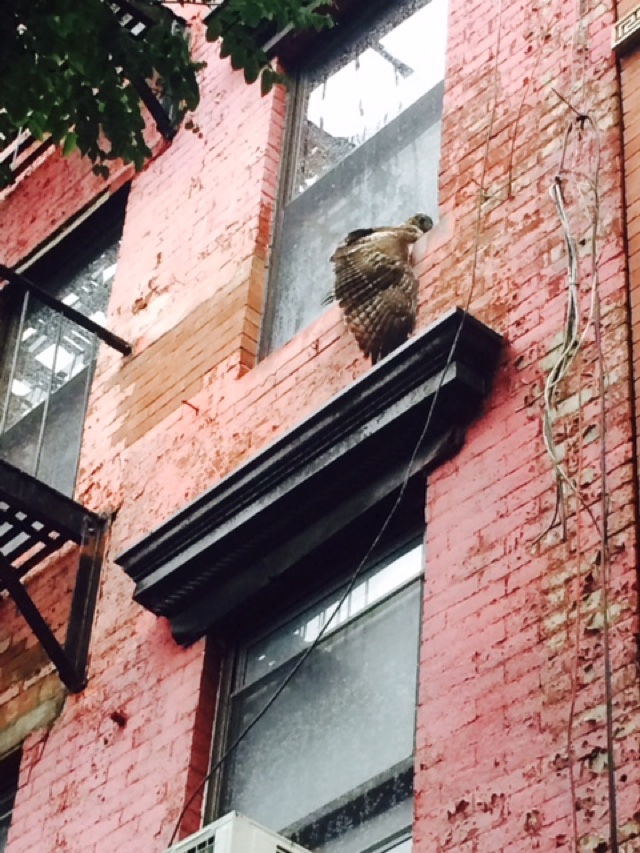 Reno left the scene after fifteen minutes of anxious observation, since he had dinner plans at In Vino next door. (It does have a four star Yelp rating!) By the time he left, no one had called the FDNY. But Rob Mastrianni, a city park ranger who specializes in hawk rescues around the city, checked in on the fledgling around 12:30 last night, and reported back that the hawk "looked fine," perched on the air conditioner unit. It was "resting/sleeping" he said.

By 6:45 this morning, the hawk was gone. "I looked around, but I couldn't find it," Mastrianni said, adding that this hawk, like most fledglings, seemed "clumsy, and not confident landing and perching."

He has plans to do a sweep of the neighborhood again this afternoon. Best case scenario, he says, the hawk will find its way to Tompkins Square Park, away from mankind's menacing window screens.

#Bibi
#east village
#hawk
#why god
Do you know the scoop? Comment below or Send us a Tip