Oak Bridge is close to one of the happiest places in Manhattan, says non-scientific study (Photo via christinyca's flickr)

Do you have a happy place in New York City? Earlier this year a site called Computational Story Lab uncovered some happy spots in Manhattan via gathering information on Twitter. So if you Tweeted that you were having the best time ever at a concert in Central Park, that would have qualified. In total they used "more than a half million messages from 2011 to investigate the happiness of NYC streets and avenues."

Inside the Apple revisited the non-scientific findings recently, noting that the site used a "list of words that had previously been ranked as indicators of happiness and connect[ed] them to geotagged Twitter posts throughout the city." Many of the happy Tweets came from the Upper West Side, and the happiest place in all of Manhattan was determined to be "somewhere near the hypothetical intersection of Seventh Avenue and West 77th Street. This is on the Ramble side of the lake and is full of serene and picturesque spots."

The original "study" notes that the West Side is happier than the East Side (but only by a little bit), and that happiness declines as one moves further uptown. Their heat map only shows 16th to 116th Street, and portrays a pretty content Midtown... so this map may more accurately show tourists bragging on Twitter about how wonderful their trip to the big city is: 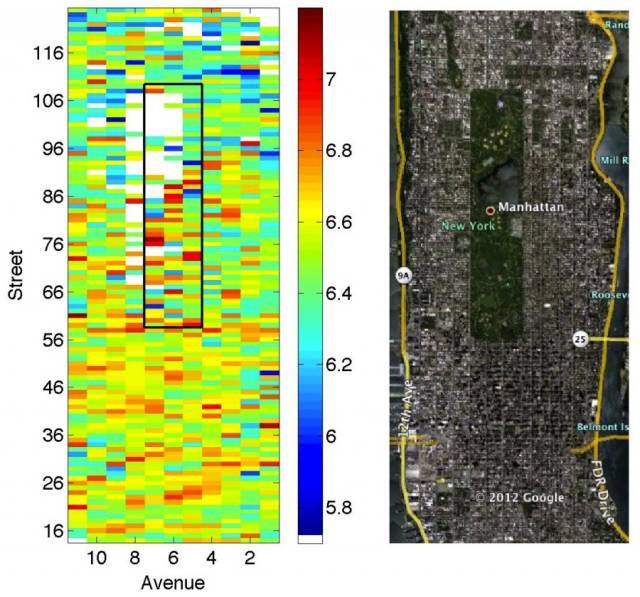 Where's your happy place in NYC? Your apartment? A barstool? Riding in a luxurious cab? Wherever Ryan Gosling is breaking up a fight or Bill Murray is playing kickball? TELL US! We promise not to farm out your answers to any "scientists" that want to expose your happy place.

#fake study
#happiest place in nyc
#happy place
Do you know the scoop? Comment below or Send us a Tip