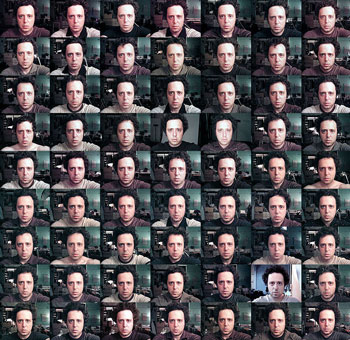 In 2006 Brooklyn photographer Noah Kalina had a lot of eyes on him. After posting a video online containing a photograph of himself taken each day for six years, he went down in viral video history. That video, called "everyday," was scored to original music by his ex-girlfriend Carly Comando, and both have the world's attention again after The Simpsons parodied it a couple of weeks ago. If you are one of the few who haven't seen the original, you can do so here. This Friday marks the 8th year he'll be taking a photograph of himself every day! And today Jen Bekman is offering one of Kalina's prints for sale through her 20x200 website.

It's been over a year since "everyday" came out, how have things changed for you since then? Have you gotten more attention as a photographer even though the video didn't really showcase your talent in that area?
Things have changed considerably. The video was accepted by both the art world and pop culture worlds. As a result I was flown to a show that displayed everyday in a museum in Switzerland and I was flown out to LA to attend parties and take part in the VH1 Big in '06 awards. For a time I was really busy preparing for all of these different shows and events. I also get a lot more emails now but for the most part things have seemed to have died down. At least for now.

Regarding my professional photography it has helped, but I can't really quantify how much. Millions of people have looked at my video and a lot check out my photography afterwards, but it hasn't really turned into jobs. I think people look at my work now and say, "This is the work of that guy who took a photo of himself every day for six years," scratch their chins and move on.

Do you have plans for another viral-type project in the future?
I've had some ideas, and I was trying to put something together a few months ago, but I stopped working on it. I think in my mind all I wanted to do was try to trump the success of everyday with something sensational. Now I'm taking my time. I may or may not have another viral video in the next few years.

Recently The Simpsons aired a parody of your video, can you explain how that came about. Has Carly Comando spoken with them or come to any sort of agreement since they used her song without permission?
The Simpsons never contacted me. They contacted Carly and sent her the script. She then sent it to me and told me they were going to do it. They were negotiating a deal for the use of her music, but then they stopped and she never heard back. Both of us assumed that they were no longer going to use her song. Sure enough it aired with her music, but we didn't even know to watch. I just started receiving text messages and emails from friends and fans around the country that night.

The next day I made a post on my blog about Fox not paying Carly for her song. Blogs and newspapers picked up the story and it became a big deal. As a result I got a call from one of the writers of the Simpsons who told me it was a big mistake and they are doing what they can to correct it. He also wanted to say how much he loved my video and thanked me for the inspiration.

I'm not totally sure what Carly has done as far as getting the money from them, but I'm pretty sure it'll get resolved soon. All of that aside, I'm thrilled that they did it and I love their take on it.

Even more recently, you were the target of some Fox News "journalism," care to defend yourself against the talking heads of that station? (Video here.)
A writer from the New York Daily News called me on Christmas because she just found my video on YouTube via the Simpsons and thought it was great. After talking to me for a little bit, and realizing that it was old news, she decided to get in touch with Carly and do the story about her. I think the real story about Carly is the success she's had since my video and the ordeal with the Simpsons, but being a sensational newspaper they turned it into some kind of ridiculous story about how we broke up because she got all the money. Fox TV news found the article and decided to do a little discussion piece about it. They just took what was written in the Daily News and made up more stuff about me and Carly just to fill air time. It was just silly. I'm not mad about it, I'm just blown away that these people can get away with that stuff. Like, if they couldn't get the facts straight to correctly report on us, then what are they doing with the "real" news?

As a photographer, do you have a favorite place and/or time of day to shoot in the city?
I love the city at twilight. I find it looks particularly magical. Anywhere in the city works at that time of day, but getting up in a building and having a view is the best.

If you could shoot anywhere here (even restricted areas) where would that be?
I would love to get inside the Domino Sugar Factory before they start tearing it up. I live right across the street from that building and I really just love that place.

Please share your strangest "only in New York" story.
One time I saw UFO's hovering around the Empire State Building.

Given the opportunity, how would you change New York?
I would make all public transportation free.

What's your current soundtrack to the city?
Beirut - The Flying Club Cup

Best cheap eat in the city.
Pies and Thighs in Williamsburg or Yeah Shanghai Deluxe in Chinatown