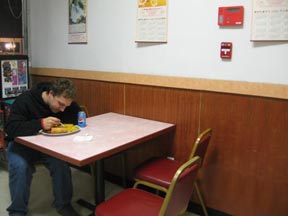 Noah Cicero's The Human War is a book of conversation. But it's not full of idle chatter. Rather, it contains the sort of talking we'd do if we weren't afraid of saying what troubles us most. If we spoke up we'd notice that we have similar, if not the same, things on our minds. The realization that others share our thoughts brings us closer as a people in a time when alienation runs rampant and we acknowledge that, willing or not, we are all participants in The Human War. He'll be in New York for a reading this week (details after the jump).

Your hometown, Youngstown, Ohio, plays a big role in your writing. What sort of place is it?
You have the feeling you don't matter. Youngstown was once a much larger city, it had steel mills where thousands worked. Now the steel mills are closed, they are still there rotting. There aren't even roads to get to some of them anymore. There are ruins of a past civilization everywhere. We have old buildings like New York City, but yours have been polished up every thirty years. Ours have been left to rot. There are whole streets with abandoned houses. There is even a whole neighborhood on the south side of Youngstown that has been completely abandoned. Forty houses grouped together in front of an abandoned steel mill with not a person in sight, garbage everywhere, shingles and gutters falling off the houses, cracked concrete, the grass three feet high.

There isn't any real possibility of making more than $40,000 a year. Most of the population lives pay check by pay check, we survive by working together. This is not a place where you can go it alone, you need to have friends and be willing to work together to make life work. Many of us live several in house, some houses have 3 generations in it. To struggle without reward is the meaning of most lives in Youngstown.

Why do you remain in Youngstown?
Here I can hide. No one cares about being an intellectual here. To me, writing and being an intellectual is like a hobby, the internet with its blogs and websites fulfill all those needs for me. I'm not big on people. If I'm in a large crowd I start to hyperventilate and get panic attacks. I can't go to concerts or go to a restaurant on Friday or Saturday night. I work in one, but in the back with only eight people and sometimes I have little panic attack back there. New York City is so crazy to me, all those people, everywhere people, everywhere you look is a person. It is insane. There are no trees or forests, no deer, no stars, or raccoons running around.

And I think I've gotten used to hopeless people, I'm pretty hopeless myself. Dealing with people in cities with hopes and dreams and ambitions is so alien to me, when they talk, it is like they are speaking a different language. I live in a world where people go to jail all the time, men dream of being truck drivers and working on heaters and air-conditioners, the women dream of being hair-dressers and low-level nurses.

I mean, my mother was a tow-motor driver and my dad's a butcher at a Kmart. The American rust-belt people, the people of Detroit, Cleveland, Pittsburgh, and Youngstown are really unique and have lived a very different kind of life than most Americans, we are really a culture and race of our own. I kind of just feel like an alien and what other people do in most other places is extremely alien to me.

If it's so hard to make by there, how do you manage?
I live in a small mill house. (A mill house is a house built by the steel mills for their workers. It is made of cinder blocks.) I have a roommate that dances. My roommate's parents got the house from a dead person and we don't have to pay rent. We only have to pay utilities. We can afford to have phone, DSL internet, and budget gas.

You write about the feelings and mindset of people your age. How would you describe your generation?
I would say we are a Fucked or Crushed or Ruined Generation. Between Global Warming, the Energy Crisis, and computers completely destroying many sectors of our economy, the lack of possible growth in our economy. My generation was raised by total Old Industrial World people who believe in Growth forever and a higher standard living (Limitless oil and energy), it won't be us that fix the world, we aren't built for it, Bush and all this shittiness has demoralized us before we even reached thirty. Perhaps our children who will be completely raised in The Information Age will have a better thought process to take care of things.

What do you hope to achieve with your writing?
I hope one day to be translated and sold in throughout Europe and somewhat sold in America. Probably a bunch of small presses that do printings of 1000 to 3000 copies would satisfy me. Concerning money, probably 10,000 a year. Get a royalty check; pay my car insurance or heating bill. Get a nice royalty check, go on vacation somewhere. Nothing much.

I know reading is down and I know I write weird books, so I've never expected to be Stephen King. And I'm more of a reader who writes, not a writer who reads. I love books and getting my books published has allowed me to be a part of the literary world in someway, which makes me happy. I just really wanted to be part of the world that makes books, to know them, write them, agent them, edit them, publish them, I love books. Doing this interview right now, really excites me, it might be unprofessional to confess such things. I need to have more ambition or something like that. But I love it; I really just love it.

Do you have any "only in New York" type experiences?
I was in New York five years ago before I had anything published and no one knew who I was. Now I can find many couches to sleep on in New York. I was alone and slept in my car for a couple of days. I was walking around at 2 in the morning and came upon a sign that said, "Private booths" or something like that. I went in and a guy directed me upstairs and there were girls behind glass screens. You paid twenty dollars and got to masturbate while she stuck a finger in her ass. They don't have those around here.

Is there a New Yorker you admire most?
Norman Mailer, for being so damn weird.

Given the opportunity, how would you change New York?
I think when someone visits New York it should be like a theme park. Like the visitor drives in and parks and someone comes over and hands the person a map like they have at an amusement park, colorful cartoons with attractions and numbers telling you what they are. And there should be people wearing like neon green outfits stationed around the city to help visitors get to places.

You could have different maps, like the guide goes, "What are you here for?"

And the guide gives you a special map telling you were the best places are to go.

What's your idea of a perfect day of recreation in New York?
Going to the Met and staring at a Picasso, visiting some writers I've never met in person but know from online, buying t-shirts and shit you can't find in Ohio, eating New York thin slice pizza, getting drunk and humping the Empire State Building.

Noah will be reading at the KGB Bar , 85 East 4th Street, on Thursday June 28th at 7 PM. He will be joined by authors Tao Lin, Tony O'Neill, Ellen Kennedy, and Ned Vizzini for the 3 AM Magazine Party Night.