No Solutions at the Brooklyn Flea Meeting 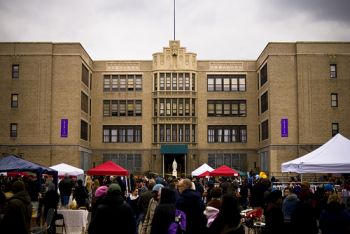 Last night the community board meeting concerning The Brooklyn Flea was held, and The Brooklyn Paper reports back that opponents and organizers alike "met in a heated, ethnically charged summit that ended without any solutions to the chasm that separates the sides." Essentially, local churches want the Flea gone, or at least no longer coinciding with services on Sunday (but really they just want it gone); many believe that the long-time residents are leaving no middle ground for compromise and are merely resisting any inevitable change.

Racked was also in attendance, despite the sign on the door that asked no press enter (!), and has some quotes from the night. One opponent stated that the weekly event is "abjectly disrespectful to the Christian sabbath," and "You better not believe this would happen with Hasidic Jews." Meanwhile, State Senator Velmanette Montgomery garnered some applause when she declared: "I fought against the stadium here. This is different. What is suffering in this city and state right now is small business. I'd rather support small businesses than Ratner."

As for the man in charge, Jonathan Butler, he noted that "last night's community meeting was conceived as a listening session for neighborhood concerns but word leaked out and a number of supporters showed up and it ended up feeling more like a referendum on the market. Senator Velmanette Montgomery, Councilmember James and Borough Prez Marty Markowitz by proxy all stepped up to the plate on behalf of the Flea; the suggestions ranged from the incremental and addressable to the not-so-reasonable and deal-breaking. The two themes we (and others) kept coming back to were community-building and the importance of nurturing small businesses."