NKOTB Reunite on the Today Show 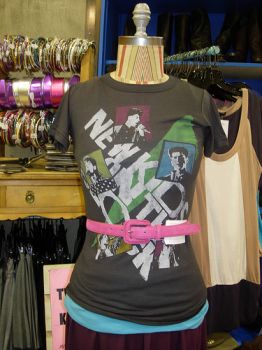 For those checking the New Kids on the Block website, hoping that rumors of the teen dream band making a comeback are true...you may find the ticking countdown clock scream-worthy. As reported by People magazine, the five-some will be performing on The Today Show this Friday, April 4th. Seriously, break out the acid wash, this is no April Fools joke.

The reunion comes in time for the 20th anniversary of the band's breakout release, Hangin' Tough. Since taking their final bow in 1994, they haven't basked in much limelight (though not for lack of trying). The most successful has been Donnie Wahlberg, who proved he had some acting chops in The Sixth Sense. And while the rest have continued on in show biz (Joey acts, Danny produces music, Jordan sings), Jonathan Knight (the oldest, now age 39) works in real estate development in Boston.

MSN has some video as a prequel to their return, including some snippets of a very excited Elisabeth Hasselbeck.

Pictured: New Kids on the Block t-shirt at Urban Outfitters.