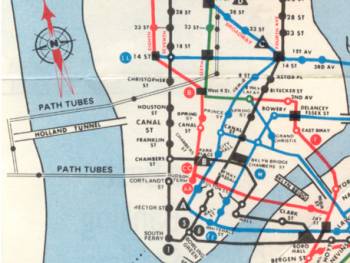 Should the PATH trains be better included on our subway map? Digital media strategist Stewart Mader believes they should, and he reminds us the New Jersey trains used to be incorporated—up until the Vignelli map, the PATH was prominently featured.

The current subway map does make note of the PATH trains, but Mader believes they need to be better represented as a rapid-transit system, as NYC's "second subway," with NJ looking like a 6th borough on the other side of the Hudson. He notes in his proposal that:

It operates 24/7, provides frequent service with short headways (time between trains), accepts the same pay-per-ride MetroCard as the Subway for fare payment, and has six underground stations in Manhattan (four with direct physical connections to the New York City Subway). The current fleet of PATH train cars (PA5) are an updated version of the Subway cars (R142A) used on the 4 and 6 trains.

However, PATH is represented on the Subway Map using the visual style labeled “Commuter rail service” in the map’s key: pale blue “railroad track” lines, square station markers, and small, lightweight text labels. This appears to be an incorrect application of the MTA visual style guide, and doesn’t effectively communicate to Subway riders that PATH is also a rapid-transit service.

Mader has created a rendering of the new map himself, and his website Subway NY NJ holds his entire proposal. This week he told us, "I was also careful to stay within the existing geographical boundaries of the map, as well as the style guide, so that it would be clear that this can be added without fundamentally altering the character and usability of the map. I also added a description box with info on PATH, and a disclaimer that service is not provided by MTA, but MetroCard is accepted."

The idea is an inexpensive one, Mader claims, "it's meant to be the kind of regional thinking and cooperation that wouldn't cost the agencies much in terms of time or money, especially compared to capital projects." One potential issue he notes is that the shade of blue the PATH uses is close to the Second Avenue Subway (but lol that's never getting finished in our lifetimes). (That is a joke... depending on when you die.)

So far Mader says he's "gotten positive reception from the Port Authority, but no on the record response from MTA yet." Reached for comment, MTA spokesman Adam Lisberg told us the following in response:

Showing other regional services like PATH in greater detail is a good use for a regional transit map, similar to the one put together for the Super Bowl. However, our map is a subway map, and its primary purpose is to serve as a guide to the subway system. We put a lot of thought into how to reduce the visual distractions and clutter on the map—we don't even show our own railroads in much detail—but this proposal would add to those non-subway distractions.

We already show PATH where it meets the subway system, although without seeming to imply nonexistent free transfers at the Sixth Avenue stations, and making PATH more prominent would require shrinking the subway portion of the map slightly to accommodate more of the New Jersey waterfront on the same size paper.

However, the MTA does include the AirTrain to JFK on the map, which is also a Port Authority-operated service. Mader points out that "there's a precedent on the current map to include non-MTA services that directly connect to the MTA network, which PATH does at four Manhattan stations."

#MTA
#new jersey
#path
#stewart mader
#subway
#subway map
#original
Do you know the scoop? Comment below or Send us a Tip