Back in August, following the deadly violence carried out by white supremacists in Charlottesville, we spoke with historian and author Arnie Bernstein about the time that 20,000 Nazi-supporting Americans staged a "Pro American Rally" at one of the old Madison Square Garden locations, at Eighth Avenue and West 50th Street. Organized by Fritz Kuhn, leader of the influential German-American Nazis group known as the Bund, the 1939 gathering also prompted some 100,000 angry New Yorkers to take to the streets, where they were met by the largest police presence in the city's history. According to Bernstein, the event was a defining moment for the emerging fascist and anti-fascist movements in the United States.

Now, for the first time, footage from that historic evening has been collected in one place and made available to the public — courtesy of filmmaker Marshall Curry and the documentary project Field of Vision. In the above short film, Kuhn can be heard speaking of a "white, gentile-ruled United States...free from Jewish Moscow-directed domination." At one point, thousands of well-dressed Americans give the Nazi salute to an American flag, a portrait of George Washington, and a Swastika. Soon after, a Jewish man charges the podium, and is swiftly dragged away by uniformed Bund men, to the crowd's great amusement.

Over email, we talked with Curry about how he stumbled across the disturbing footage, the identity of the brave disrupter, and the history "that we'd prefer to forget."

How did you get your hands on this footage? What was your reaction when you first saw it?

A friend of mine told me about it last year, and I couldn't believe that I'd never heard of it. When I found out that it had been filmed, I asked an archival researcher, Rich Remsberg, to see what he could find. It turned out that short clips had been used in history documentaries before, but no one seemed to have collected together all of the scraps of footage — there was some at the National Archives, some at UCLA's archive, some at other places. So he gathered it, and I edited it together into a short narrative. When Charlottesville happened, it began to feel urgent. So I sent it over to Laura Poitras and Charlotte Cook at Field of Vision and said, "Have you ever heard of this event? Would you be interested in supporting the film?" And they jumped on board. 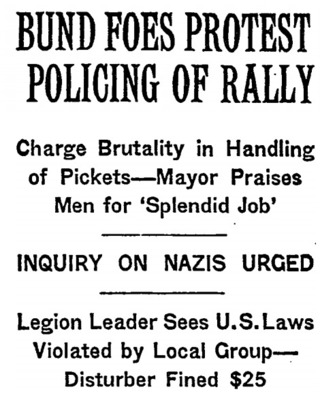 On February 22nd, 1939, Isadore Greenbaum was described by the Times as a "disturber" (New York Times)

It really illustrated that the tactics of demagogues have been the same throughout the ages. They attack the press, using sarcasm and humor. They tell their followers that they are the true Americans (or Germans or Spartans or…). And they encourage their followers to "take their country back" from whatever minority group has ruined it.

What do we know about the man who charged the podium?

He was a 26-year-old plumber's helper from Brooklyn named Isadore Greenbaum. When he ran on stage to protest, he was beaten up and had his pants ripped off as he was thrown from the stage. He was also arrested for disorderly conduct and fined $25.

There was a debate at the time over whether the Bund should be allowed to have a rally, which — like so many things about the event — seems eerily contemporary. Greenbaum explained to the judge the day after the rally, "I went down to the Garden without any intention of interrupting. But being that they talked so much against my religion and there was so much persecution I lost my head, and I felt it was my duty to talk." The Magistrate asked him, "Don't you realize that innocent people might have been killed?" And Greenbaum replied, "Do you realize that plenty of Jewish people might be killed with their persecution up there?"

But in the New York Times, the American Jewish Committee argued that although the Bund was "completely anti-American and anti-Democratic… because we believe that the basic rights of free speech and free assembly must never be tampered with in the United States, we are opposed to any action to prevent the Bund from airing its views."

Mayor LaGuardia, for his part, ridiculed the event as an "exhibition of international cooties," and said he believed in exposing cooties to the sunlight. 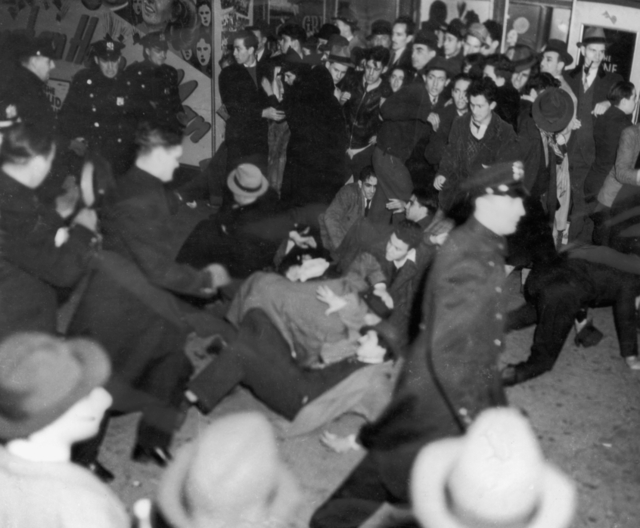 Are you surprised more people aren't familiar with the rally?

The footage is so powerful, it seems amazing that it isn't a stock part of every high school history class. But I think the rally has slipped out of our collective memory in part because it's scary and embarrassing. It tells a story about our country that we'd prefer to forget. We'd like to think that when Nazism rose up, all Americans were instantly appalled. But while the vast majority of Americans were appalled by the Nazis, there was also a significant group of Americans who were sympathetic to their white supremacist, anti-Semitic message. When you see 20,000 Americans gathering in Madison Square Garden, you can be sure that many times that were passively supportive.

In a part of Fritz Kuhn's speech that isn't in the film, he applauds Father Coughlin, whose radio shows praising Hitler and Mussolini reached audiences of 30 million. Henry Ford and Charles Lindberg expressed anti-Semitic beliefs. And press magnate William Randolph Hearst declared, "Whenever you hear a prominent American called a fascist, you can usually make up your mind that the man is simply a loyal citizen who stands for Americanism." (In a small ironic twist, we licensed some of the Bund footage from the Hearst collection at UCLA.)

These were ideas that, if not universally accepted, were at least considered legitimate points of view. But two years after this rally, Japan attacked Pearl Harbor and Germany declared war on the U.S. And at that point this sort of philosophy became unacceptable. When the Nazis began killing American soldiers, we started erasing the fact that any Americans had ever shared their philosophy.

In the end, America pulled away from the cliff, but this rally is a reminder that things didn't have to work out that way. If Roosevelt weren't President, if Japan hadn't attacked, is it possible we would have skated through without joining the war? And if Nazis hadn't killed American soldiers, is it possible that their philosophy wouldn't have become so taboo here?

Can you talk a bit about your stylistic choices — what was the thinking behind presenting the footage this way, and what do you hope audiences take away from it?

The film doesn't have narration or interviews to clearly underline the takeaways, but I think most audiences will find lots to chew on.

To me, the most striking and upsetting part of the film is not the anti-Semitism of the main speaker or even the violence of his storm-troopers. What bothers me more is the reaction of the crowd. Twenty-thousand New Yorkers who loved their kids and were probably nice to their neighbors, came home from work that day, dressed up in suits and skirts, and went out to cheer and laugh and sing as a speaker dehumanized people who would be murdered by the millions in the next few years.

When the protester is being beaten up there's a little boy in the crowd who I zoomed on in the edit. You can see him rub his hands together, doing an excited little dance, unable to contain the giddy excitement that comes from being part of a mob. And when the protester is finally thrown off stage, there's a long slow pan across the crowd that is laughing, clapping, cheering, like they're at a World Wrestling Federation match.

We'd like to believe that there are sharp lines between good people and bad people. But I think most humans have dark passions inside us, waiting to be stirred up by a demagogue who is funny and mean, who can convince us that decency is for the weak, that democracy is naïve, and that kindness and respect for others are just ridiculous political correctness.

Events like this should remind us not to be complacent — that the things we care about have to be nurtured and defended regularly — because even seemingly good people have the potential to do hideous things.

At first I thought I'd make a traditional documentary — with an historian explaining the background of the group. But when I started cutting the footage together, I realized there was real power in just watching it unfold, without explanation. When most people watch it, at first they are puzzled: "What is this?" They see George Washington and American flags and hear the Pledge of Allegiance (notably, before the phrase "Under God" was added in 1954), but then they see swastikas and people giving the Nazi salute, and it's really unsettling.

So I decided to keep it pure and cinematic and unmediated — as if you are there, watching, and wrestling with what you are seeing. I wanted it to be more provocative than didactic — a cold splash of history tossed into the discussion we are having about white supremacy right now.