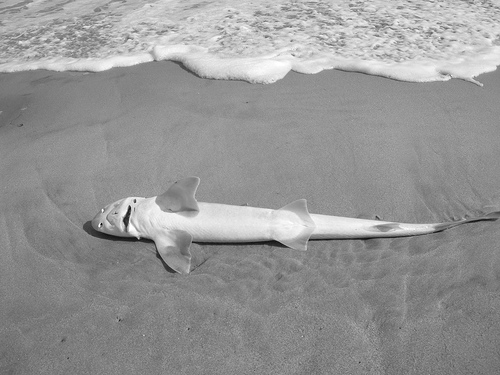 Cue up John Williams famous two-note motif! Following Saturday's shark sighting in Rockaway, another shark reached the shores of New York in Coney Island. The summer went out with a bite, not a bang, as city lifeguard Marius Mironescu rescued a 2-foot sand shark from frenzied beach-goers yesterday. And as he swam the shark out to safety...the little guy gave him a bite.

"They were holding on to it and some people were actually hitting him, smacking his face. Well, I wasn't going to let them hurt the poor thing," he said.

He carried the shark - a baby, he reckons, and harmless to humans - to a less populated area and started backstroking out to sea, dragging the shark with one hand.

"He was making believe like he's dead, then he wiggled his whole body and tried to bite me. He didn't get it," Mironescu said.

After a summer of mostly still waters, the sharks were out in full force this weekend. There was another small one spotted at South Beach in Staten Island on Sunday, and The Post reports that last Wednesday a man-eating mako shark was caught just a mile off the shore near the Rockaway reef. Two fisherman caught the 200-pounder after a one hour struggle at sea, one of them saying, "He was nasty. He opened his mouth. That's when we really got nervous. He had about 300 teeth - fuhgeddaboutit!"

Photo of shark on Rockaway Beach in July via Pink & Purple's Flickr.