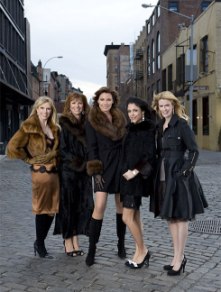 Earlier this year Bravo announced their "Real Housewives" series would be moving from Orange County to The Big Apple. The show premieres tonight, and critics have already gone sour on it.

The NY Post describes the five women chosen to represent NYC as "status-hungry, money-mad matrons" (a real life Cashmere Mafia living in a Lipstick Jungle?). Appalled that out of "8 million residents representing every known corner of the globe" the network picked five who don't represent actual real New York housewives. Not really a shocker.

Variety calls the New York show an "irritant", where the original in California was merely a guilty pleasure. And The Daily News weighs in on the shallow show as well: "saying these women represent 'New York housewives' is like saying Alex Rodriguez represents the New York working class."

Bravo's VP or programming, Andy Cohen, declares "These woman are as iconic to New York City as the other ones are to Orange County." Iconic? Not anymore. Do these women look familiar to you?