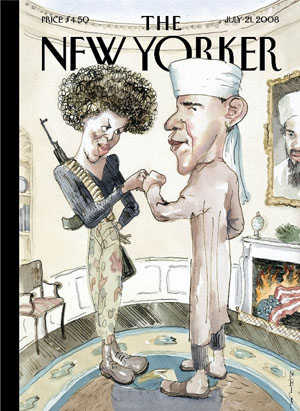 Barack Obama’s campaign spokesman Bill Burton is calling this week’s New Yorker cover art “tasteless and offensive.” The illustration by Barry Blitt depicts the Illinois senator in the Oval Office wearing traditional Muslim garb while doing a “terrorist fist jab” with his wife Michelle, who is dressed in fatigues, with an Afro and an AK-47 slung over her shoulder. To complete the scene, there’s a portrait of Bin Laden over the fireplace, in which an American flag is ablaze.

The Huffington Post’s Nico Pitney asked Blitt if “in retrospect, given the outcry, is he glad he made the art?” Blitt’s reply: “Retrospect? Outcry? The magazine just came out ten minutes ago, at least give me a few days to decide whether to regret it or not... I think the idea that the Obamas are branded as unpatriotic [let alone as terrorists] in certain sectors is preposterous. It seemed to me that depicting the concept would show it as the fear-mongering ridiculousness that it is.”

New Yorker editor David Remnick is defending the cover, which is accompanied by a long 18 page article about Obama’s sharp-elbowed rise through the Chicago Democratic political machine. Remnick tells the Daily News the cover “satirizes the use of scare tactics and misinformation in the Presidential election to derail Barack Obama’s campaign… It is meant to bring things out into the open, to hold up a mirror to the absurd. And that's the spirit of this cover."