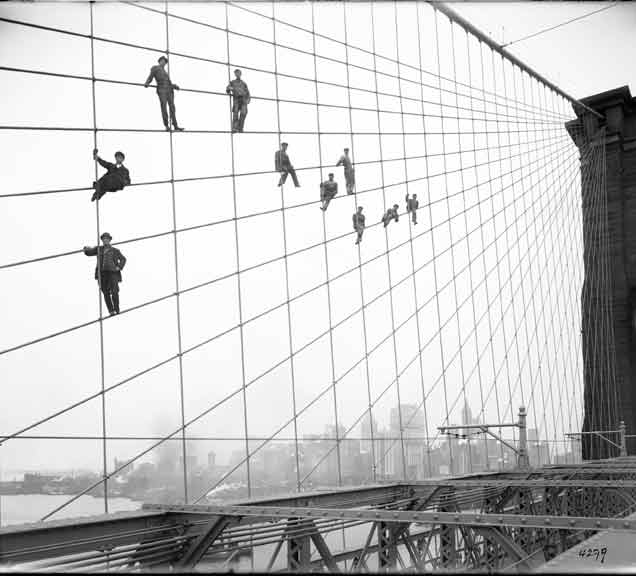 Through September 4th, Eugene de Salignac's photographs will be shown at the New York Rises exhibit at the Museum of the City of New York. What separates this photographer from others who have taken famous shots of this city throughout the ages, is that de Salignac served as photographer for the New York City Department of Bridges/Plant and Structures. He did this for the first three decades of the 20th century (1903 to 1934) and in doing so brought us thousands upon thousands of images of New York, in fact, rising. The images of "bridges, buildings, roads, and subways document the emergence of the modern city, while at the same time providing a unique aesthetic vision of the built environment and the people who created it."

The NY Times has a story on the "non-artist," saying "if he is not the equal of Berenice Abbott, Margaret Bourke-White, Walker Evans and Alfred Stieglitz, his work now on view at the Museum of the City of New York demonstrates that he is at least their kin." Michael Lorenzini, a photographer who works for the Municipal Archives in Manhattan is the one who, fairly recently, found de Salignac’s logbooks. He then determined 10,000 prints and 20,000 glass negatives in the archives were his work, the Times describes some of his images:

Though the Brooklyn Bridge had been open for 20 years when Mr. de Salignac first took pictures of it in 1903, the exhibition’s most arresting image portrays the bridge’s cable painters in 1914. The dapper workers are lined up across the gridlike net of cables, so it looks as if they’re performing a high wire act. No overt signs (hard hats, safety harnesses) suggest the dangers of their job.

Mr. de Salignac photographed the Williamsburg, Manhattan and Queensboro Bridges just as construction was completed and the subways tracks were being laid. In some photos he exhibits his appreciation for New York’s work force.

More often than not, however, it’s the bridges themselves that Mr. de Salignac monumentalizes. A 1907 picture of the Manhattan Bridge’s anchorage, which he shot from below, makes it resemble a modern version of an Egyptian temple, built to survive centuries of wear and tear. Though they rise up into the air without the support of flying buttresses, the bridge’s soaring steel towers recall Gothic cathedrals.

Along with dramatic architectural elements and shots of the city's workforce, de Salignac also documented a fair share of tragedy on these structures. Pictures of demolished vehicles, a truck stuck in the railings of the Williamsburg Bridge, a shattered horse cart. All in all, his photographs are, collectively, one giant snapshot of a city on the rise. Find more details on the exhibit, here. The New Yorker has a slideshow from earlier this year with commentary by the great-granddaughter of de Salignac.