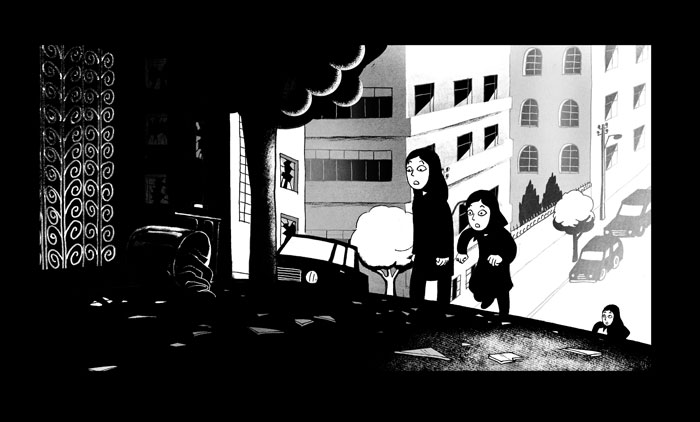 With a heavy heart, we say farewell to another wonderful film festival at Lincoln Center.

The program closed with an animated movie, an adaptation of Marjane Satrapi's graphic novels about growing up in Iran called Persepolis. Using the voices of French actresses Catherine Deneuve as Marjane's mom and Deneuve's daughter with Marcello Mastrioanni, Chiara, as Marjane, the movie is a charming and evocative snapshot of life during the Islamic revolution and subsequent war with Iraq. Marjane is a sassy little girl, like Eloise in Tehran, who grows into an equally opinionated teenager who loves Michael Jackson and Iron Maiden even though she wears the veil. The narrative spans all four of the novels as an adult Marjane reminisces as an exile from the Orly airport. While the film does begin to drag a little in the final third as we follow the ups and downs of Marjane's love life, it's still a fascinating document about life in the Middle East. It'll hit regular theaters at the end of December.

Another filmmaker from France director Catherine Breillat, who previously directed the controversial films Romance and Fat Girl, brought a lavish costume drama to the festival called The Last Mistress.

Asia Argento stars at the mistress, a Spanish courtesan whose ten year long passionate affair to a nobleman could ruin his new marriage. The settings and the production design in this movie is totally sumptuous and the meticulous Breillat told the audience after the film that she acquired many of the antique textiles and props herself. Unfortunately while working on this project Breillat suffered a stroke, and seeing her on stage though recovering, it's obvious she's physically diminished. However that didn't seem to stop her from making the biggest budget film she's ever done and according to Roxane Mesquida—who appeared in Fat Girl and Sex is Comedy as well as Mistress—still challenging her actors.