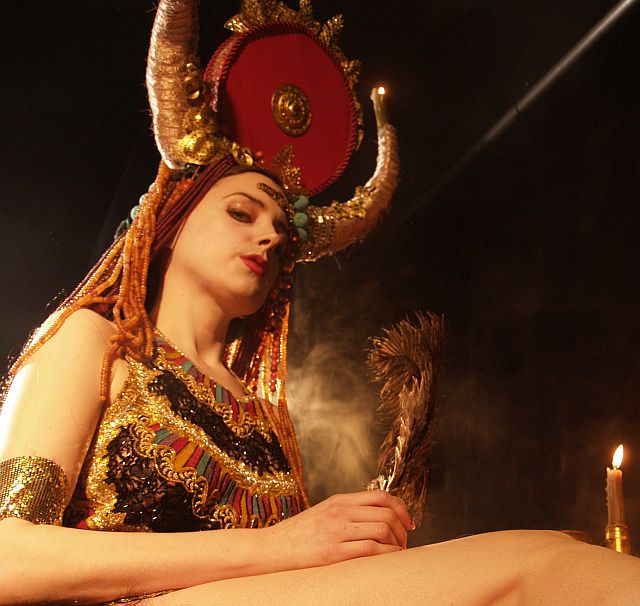 The Fringe, the Summer Play Festival, the Ice Factory—all that's behind us. With summer all but over, it's time for the big dogs of Broadway take center stage once again. Today the Times arts section is packed with ads and articles about the upcoming theater season, which critic Charles Isherwood has dubbed A Season of Men. That's mainly because there are two David Mamet plays set to open, Arthur Miller's All My Sons (with its gender-specific title) is being revived, and a naked Daniel Radcliffe can now be seen onstage at the Broadhurst Theatre. All that and a few other highlights from Broadway and Off Broadway below.

Anger/Nation: Radiohole, that irascible anarchist theater collective, is back with a new production at the Kitchen. The show (deep breath) "explores the contradictory puritanical and hedonistic underpinnings of the American psyche by colliding the psychedelic aesthetic of occult filmmaker Kenneth Anger with the histrionic escapades of the self-proclaimed 'America’s Loving Home Defender,' Carry A. Nation—a remarkable 19th century, hatchet-wielding temperance crusader. Using miniature floating video monitors, post-it notes, licorice, and a healthy dose of fairy dust, Radiohole conjures a pleasuredome." Two questions: What happened to founding company member Erin Douglass? And will the Kitchen—a much more capacious hole than their funky Williamsburg home—swallow them whole? Tune in September 11th to find out.

Equus: Yes, Harry Potter gets naked. But that's not the only compelling reason to see this riveting play by Peter Shaffer about an unhinged stable boy (Daniel Radcliffe). The production was a hit in London last year, with Richard Griffiths (also a Harry Potter veteran) delivering a reportedly spellbinding performance. In previews; opens September 25th.

The Seagull: Done right, Chekhov's 1895 play about a stage diva, her pretentious self-destructive son, a self-absorbed author, and the infatuated young woman caught between them is as funny as it is jarring. This revival was well received in London last year, with Kristin Scott Thomas getting stellar reviews. The Broadway version has the added bonus of the brilliant Peter Sarsgaard as Trigorin, the author. Opens October 1st.

Beast: Michael Weller's black comedy concerns two injured Iraq war veterans who take a road trip to Crawford, Texas, in hopes of presenting the president with their plan to save America. It works. The play premieres at New York Theater Workshop on September 15th, and Weller also has another play opening this month. Called Fifty Words, the two-character domestic drama stars Norbert Leo Butz and the extraordinary Elizabeth Marvel.

All My Sons: Katie Holmes, meet Arthur Miller. Producers of this revival are banking on Tom Cruise's talentless beard to draw in the rubes, but there's reason to believe the rest of the ensemble will make the evening worthwhile. John Lithgow and Dianne Wiest can certainly be counted on to hold up their end, and Miller's 1947 tragedy about a war profiteer is so well-made that it just might survive the Scientologist's heavy thetans. Opens October 16th.

Billy Elliot the Musical: With tunes by Elton John, this West End transfer tells the colorful tale of a working-class kid's fantasy about being a ballet dancer during the British miner's strike in the mid-'80s. Opens November 13th.

Blasted: Down on Walker Street, one of the more anticipated plays of the year will have its New York premiere at Soho Rep, over ten years after it was written by Sarah Kane, who committed suicide in '99. The controversial drama is rich with rape, cannibalism, and Kane's incisive and penetrating poetry. On Tuesday, the company's "99 cent Sunday" tickets will go on sale at 9 a.m. and sell out immediately. Starts October 2nd.

Speed the Plow: David Mamet's satire of Hollywood douchebaggery stars the excellent Raul Esparza, who wowed us last season in that enthralling revival of Harold Pinter's The Homecoming. Elisabeth Moss from Mad Men and Jeremy Piven from Entourage round out the impressive ensemble. Opens October 23rd.

American Buffalo: This is the second David Mamet play being revived on Broadway. The characteristically profanity-laced comedy about con men and a rare coin scam stars John Leguizamo, Cedric the Entertainer, and Haley Joel Osment (The Sixth Sense.) Robert Falls, artistic director of the Goodman in Chicago (where the play premiered in 1975) directs. Opening November 17th at the Belasco, where the ghost of Passing Strange still lingers.

P.S. 122, The Chocolate Factory, 3 Legged Dog and St. Ann's Warehouse all have some exciting shows in store for the fall as well. What are you looking forward to?