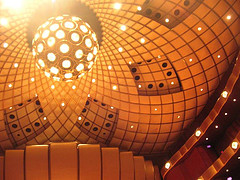 The organizations had tried to come to terms on renovation plans several years ago in the early stages of Lincoln Center’s redevelopment effort. But discussions fell apart over issues like whether to create a center aisle (the opera was strongly in favor; the ballet, adamantly opposed) and how to adjust the acoustics (the opera believes they are in dire need of redress; the ballet thinks they’re fine).

One thing that's helped the two step forward is the new chairmen of the boards, Barry S. Friedberg at the ballet and Susan L. Baker at the opera. "When Mr. Mortier was selected, he made a strong case for staying at the State Theater, a marked shift from the stance of his predecessor, Paul Kellogg, who had spearheaded the search for a new home." With both companies staying, the New York State Theater will see some changes, including a modular acoustical system that can be moved in for the opera and out for the ballet...a larger orchestra pit that can move up and down; to upgrade the seating, carpeting and box office; and to rewire the theater to improve lighting and media capabilities." That center aisle isn't happening in this lifetime, however.

The two companies have been alternating seasons at the State Theater, and are scheduled to present a progress report on Thursday. The changes (which will cost from $30 to $60 million) are part of a major redevelopment of Lincoln Center which should be wrapping up in 2010. The opening night fundraiser event last week kicked off the Ballet's 59th season and raised around $1.6 million.