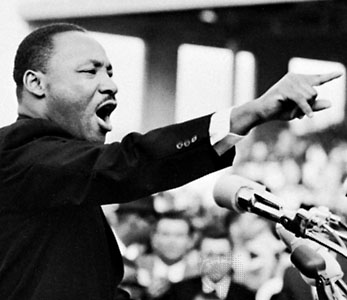 THEATER: Wolf Lane Productions presents Victims of the Zeitgeist (The Tragedy of Martin Luther King, Jr.), written & directed by Ellwoodson Williams. The production "offers an exciting and telling insight into just who Martin Luther King, Jr., was as leader and simply as a sensitive and intelligent human being who loved life and who had a sense of humor, a deep understanding of the human condition - its strengths and weaknesses - and a profound belief in justice."

TOUR: Take a walk in the past with the Martin Luther King, Jr. Walking Tour of Harlem. The NYC Discovery Walking Tour will include stops at the Apollo Theatre, Lenox Lounge, and the site of the NYC assassination attempt (you can read about the attempt here).

DISCUSSION: WNYC Radio and Civic Frame host a conversation titled Embracing the Radical Dr. Martin Luther King, Jr.: Prophetic or Passé? The discussion aims at the more provocative views of MLK and their relevance to social issues today. It will be co-hosted by Brian Lehrer and April Yvonne Garrett (who will have a handful of panelists with them) and will include the following topics:

There will also be readings by Def Poetry Jam creator Danny Simmons and Black Arts Movement veteran Sonia Sanchez. If you miss out, it will air the following day on 93.9 FM, 820 AM and there will be a live webstream at WNYC.org.

MUSIC: S.O.B.’s hosts a Martin Luther King Day Celebration this Sunday. Civil Rights activist Gil Scott-Heron, "the revered musician and poet, most famous for the 1970’s era-defining poem, The Revolution Will Not Be Televised," will perform two shows -- taking time off from his book chronicling the history of MLK day.

EVENT: BAM hosts the 22nd annual Brooklyn Tribute to Dr. Martin Luther King, Jr. This year the free celebration's Master of Ceremonies will be Deputy Borough President Yvonne J. Graham. Also on hand will be Brooklyn Borough President Marty Markowitz, keynote speaker Mavis Staples (who returns the next day for a performance), and Gary Anglin and the Voices of CCC will be the entertainment. On top of all that, the program also features free screenings at BAM Rose Cinemas of At the River I Stand, and a community art exhibition titled Picture the Dream is also scheduled.

MOVIE: The Academy of Motion Picture Arts and Sciences keeps the influential words of Dr. Martin Luther King, Jr. alive on Monday with a screening of King: A Filmed Record…Montgomery to Memphis. The film’s associate producer will be on hand for a pre-screening discussion. The three-hour documentary consists only of newsreel and other period footage, from the Montgomery bus boycott of 1955 through the assassination of the civil rights leader in 1968. The film was shortened throughout the years but will screen in full on Monday.