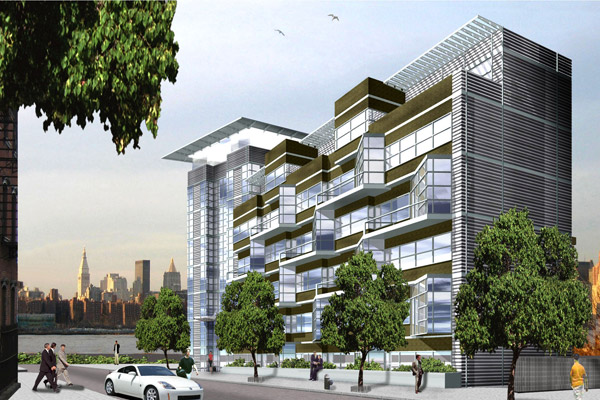 With more than a dozen new residential buildings being developed in Williamsburg and Greenpoint, the area is getting, you guessed it, another condo tower.

111 Kent Ave., between North 7th and 8th streets, is a seven-story building with 57 units, all of which have views of the East River and the Manhattan skyline. The design of Williamsburg’s latest, according to architect Michael Muroff, was influenced by the work of Moshe Safdie.

The building’s exterior, an off-white brick with metal panels, has a modulating façade and cantilevered terraces. “One man’s ceiling is another man’s roof,” Muroff told Gothamist, adding that the angle of the building’s windows form an almost armadillo-like shell.

The building’s heating and cooling system, using a variable refrigerant valve, has individual cooling stations with microprocessors that monitor energy use instead of a giant cooling tower on the roof. Muroff said it’s the first of its type in the city.

Like so many condos these days, 111 Kent has a swimming pool with a two-level exterior terrace and, natch, skyline views. It’s located on a setback off the fifth floor. The building also has an exposed concrete elevator that allows riders to see outside. The interior is being designed by

Aside from typical condo amenities such as storage and garage parking, there will be something rather unusual though increasingly de rigeur for luxury condos: A Fresh Direct fridge where food is stored when residents are unable to be home for deliveries.

We love Fresh Direct and all, but, well, RIP Old New Williamsburg.