Yesterday we learned that the city's rare Mandarin Duck has been taking brief holidays over in New Jersey, when video shot in October surfaced showing the duck at Woodcliff Lake in North Bergen. And now we've received video showing him out on the open waters of the Hudson River, on the New Jersey side, with the New York City skyline behind it. Beautiful.

The latest video of Mandarin Patinkin comes from Cole Baylis, who told Gothamist he saw the duck during his morning ferry commute to the city on October 12th (the day after we first reported on the duck's presence in the city). "He was swimming with some other ducks right in front of the UBS building close to the Lincoln harbor ferry station," he says.

At the time, Baylis had not heard anything about the duck being here, and, realizing he was a rare sight in these parts, "was shocked at what I saw. It's been fun hearing about it after that, and following how many people are excited about it. It's a pretty incredible bird and we are all lucky to have seen one in person!"

Here's the exact location where the Mandarin duck was spotted; Baylis told us that he saw the duck there again on the 25th, but he hasn't seen him there since. 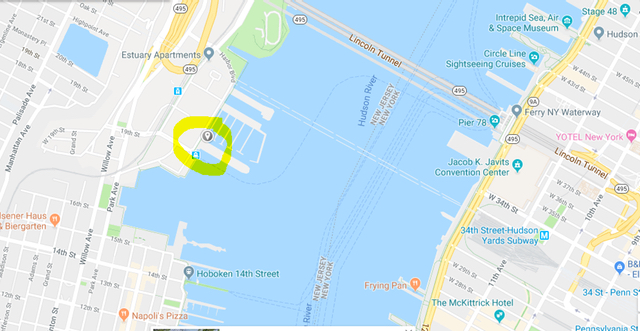 (Map of the duck's location in the above video)

As of Tuesday morning, the duck is still at Central Park Pond:

#hudson river
#mandarin duck
#mandarin patinkin
#must credit gothamist dot com
#original
Do you know the scoop? Comment below or Send us a Tip