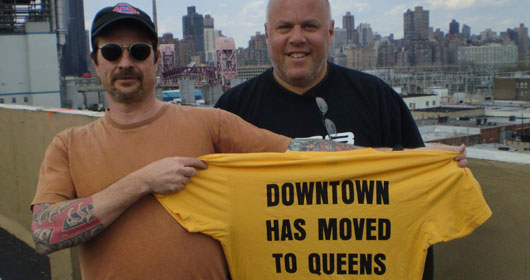 The Queensbridge Theater said hello to the world via a post on their website earlier this year. It told the story of Michael Waldman, Robert Prichard and their 5,000-square-foot dream space located at 37-31 10th Street in Long Island City, Queens.

The nearly-24-hour entertainment taking place in The Queensbridge Theater won't be of the ilk one is used to seeing around that area; the calendar will cater to a less seedy crowd. The space will be used for after-school programs, concerts, cabaret, off-Broadway shows, art exhibits and just about whatever else the community is craving. Including eggs! The venue will open at 7 a.m. and serve breakfast, lunch and dinner throughout the day.

As for the theater itself, it has a capacity of 500 and is housed within the 5-story warehouse (being built up to 6) that Waldman purchased for a cool $6 million; he and Prichard call it “a rock and roll supper club," comparing it to Bowery Ballroom (but with a restaurant).

The Observer recently spoke to Prichard about the project, who told them of a Times Square-style signage idea he envisions: “I’d like it to be visible from the 59th Street Bridge. First, it flashes ‘Queens,’ then ‘Bridge,’ then ‘Theater,’ and then ‘Queensbridge Theater.’ And then maybe an arrow that lights up and points down to our loading dock.” Prichard lives far from the "crossroads of the world" however, he has long been a fixture in downtown Manhattan -- on the scene protesting Cabaret Laws and even opening his own Lower East Side venue, called Surf Reality, in 1993 (in 10 years his rent went from $2,500 to $8,000/month).

As many creatives before him, he eventually headed to an outer-borough, and along with partner-in-crime Waldman, adopted the slogan “Downtown Has Moved to Queens.” Look for the centerpiece of this new Downtown to open its doors this summer.