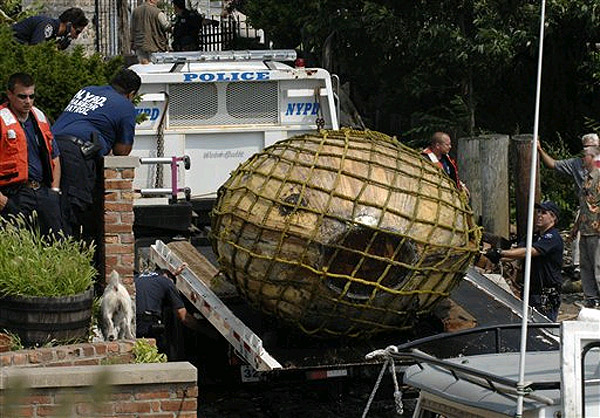 Yesterday, the odd news about the NYPD's arrest of three men involved with an egg-shaped submarine near the Queen Mary 2, off the Brooklyn Cruise Terminal, revealed that a Brooklyn artist was behind the whole benign operation. Police Commissioner called artist Duke Riley's stunt "marine mischief," adding that the "creative craft of three adventuresome individuals" did "not pose any terrorist threat."

Mr. Riley’s plan was also military, in a sense — though mostly metaphorical, given that he is an artist. He wanted to float north in the Buttermilk Channel to stage an incursion against the Queen Mary 2, which had just docked in Red Hook, the mission objective mostly just to get close enough to the ship to videotape himself against its immensity for a coming gallery show.

Even though Riley's intentions were artistic, the NYPD prepared a tactical approach when a police officer aboard the Queen Mary 2 saw two unidentified floating objects. There is a security zone around the QM2 (100 yards), and Riley's acorn, plus a raft carrying two friends, were within 25 yards of the cruise ship. As it happens, the state's Deputy Public Safety Secretary Michael Balboni was flying over the scene in a chopper, observing port security, and he told Newsday, "It looked like a big sea buoy bobbing in the water." 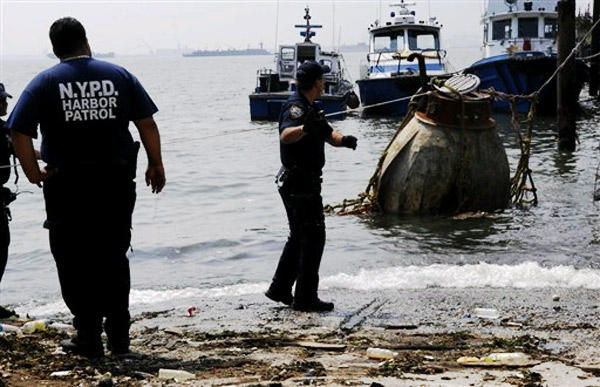 The submarine was based on a 1775 design called the Turtle. According to Wikipedia, it "was designed as a naval weapon, and it was meant to drill into a ship's hull and plant a keg of powder, which would be detonated by a time fuse." The Turtle had a NYC connection, too: "On September 7, 1776, Turtle, under the guidance of Army volunteer Sergeant Ezra Lee, attacked HMS Eagle, which was moored off what is today called Liberty Island, but it could not manage to bore through the hull. When he attempted another spot in the hull, he lost the ship, and eventually abandoned the attempt."

The version Riley built was made from "cheap plywood, coated with fiberglass and topped off with portholes and a hatch bought from a marine salvage company" (Times) and had two tons of lead and rock for ballast. The Times' Randy Kennedy wrote after Riley, Jesse Bushnell and Mike Cushing had made sure it would float on Thursday night, the egg, named the Acorn, "resembled something out of Jules Verne by way of Huck Finn, manned by cast members from 'Jackass.'"

"I just got caught up in the current," he said over chips and salsa.

Asked what was on his mind as helicopters circled overhead, he replied, "I was wondering if I was going to get in The Post and what the headline would be."

"I suppose it looks like some kind of stunt," he said. "It's really just a part of a much larger project that has a lot of different elements to it."

"I was just relying on the current at that point. It was floating me," he said. "When the Harbor Police showed up, I wasn't in the security zone. I thought they would just tell me to get out."

"I would not say the scare was overblown," he said. "But I also don't believe I was doing anything illegal."

"The Coast Guard and Harbor Police are pretty used to dealing with nut jobs like me," Riley told The Post. "They're usually pretty understanding, pretty mellow."

Riley also waxed philosophical to the Daily News, "I know I've scared some people and I know I wasted a lot of people's time today, but also a lot of people were amused by it. I don't know if I regret it. I'm sure when I know how the judge reacts, I'll have a better idea." 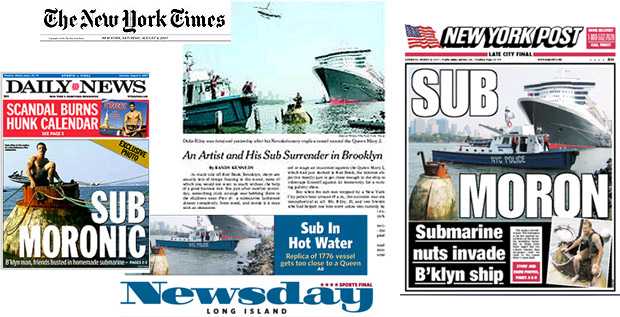 The police seized the egg, but Riley's art dealers hope to display it in show at their gallery. Another place it could go is the NYPD Museum in Peck Slip. The artist has a court date on August 28.

Riley's earlier attempt to cast off in the Turtle are documented in this Flickr set, Adventures with the Egg. The Times also had a slideshow of Riley preparing for his trip and his eventual run-in with the police. At the end of the day, we learned a few things: 1) The NYPD is definitely watching over the Queen Mary 2; 2) the Turtle submarine is pretty cool; and 3) events like this make us love New York. We also want to know how Mango the dog feels.

Photographs of the NYPD hauling the Acorn by Louis Lanzano/AP