It's been a while since we've gotten any updates on the Brooklyn Strand, so here's a quick refresher: it's a plan for Downtown Brooklyn conceived by 40 stakeholder groups who envision "connecting Downtown Brooklyn to its waterfront through a reimagined series of disconnected parks, plazas, and greenways—spanning more than 40 acres of publicly-owned land." The project, which is a joint effort of the mayor's office, Downtown Brooklyn Partnership, the Department of Parks and Recreation, Brooklyn Bridge Park, and WXY architecture and urban design firm, was first proposed last March, but now, after soliciting community input, its proponents have released a new and improved plan, with more details about what such a makeover would entail.

The plan would completely renovate Columbus Park, Tillary Parks, the Brooklyn War Memorial, the area around and under the Brooklyn Bridge, the parks around the base of the BQE, Trinity Park, Commodore Barry Park, and the Park Avenue crossing; it would also remove many fences around area parks to make them more accessible, and would add a number of bike lanes to the Downtown Brooklyn area. The key takeaway here is that it would make much of Downtown Brooklyn far more accessible to non-motorists by widening sidewalks, creating pedestrian plazas, and adding more bike lanes. 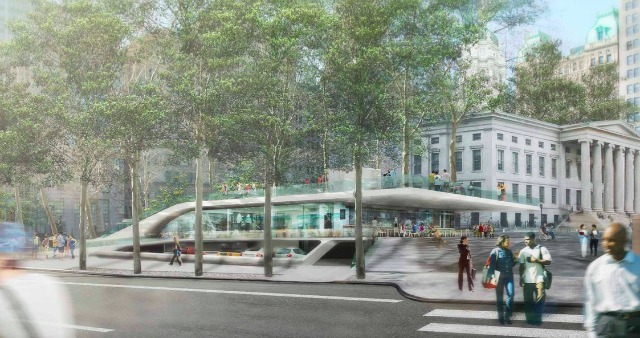 Perhaps most dramatic would be the alterations to and around the Brooklyn Bridge. The plan envisions a new pedestrian access bridge to the walkway that heads into Manhattan, starting in Cadman Plaza Park. Anchorage Plaza—that triangle formed by the BQE, the Brooklyn Bridge, and Washington Street, currently housing bridge repair equipment—would be transformed into a pedestrian plaza and market, with flexible space for exhibits, vendors, and food markets. An added structure would offer stair and elevator access to the Brooklyn Bridge from the plaza. 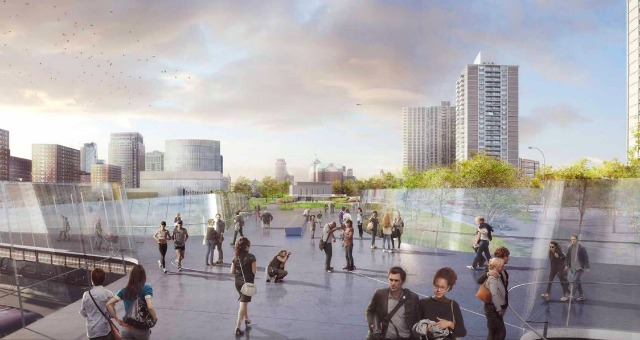 New and improved pedestrian access to the Brooklyn Bridge. (WXY)

There's lots more to peruse here, from improved connections for NYCHA residents to Brooklyn Bridge Park and the installation of public art along the Strand. But it's all still hypothetical: it needs the approval of numerous city agencies, as well as full funding—which, along with a timeline for completion, is conspicuously missing from this plan. According to the Brooklyn Eagle, Brooklyn Borough President Eric Adams has already allocated $1 million toward the re-opening of the War Memorial, and another $500,000 to transforming park space between Borough Hall and the Brooklyn Bridge.

"This was truly a herculean effort and the resulting vision reflects the thoughtfulness and deep commitment of our community to this endeavor," said Tucker Reed, president of the Downtown Brooklyn Partnership, in a statement. "The Brooklyn Strand is a vital component of the area’s growth, not only by building better connections for its residents, but through the creation of much needed public space and neighborhood amenities befitting our beloved borough."