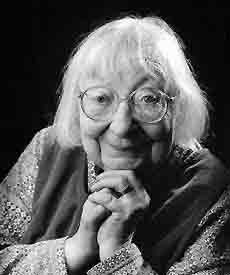 The engines fueling Jane Jacobs' legacy are at full throttle, with the Municipal Art Society's new exhibition, titled "Jane Jacobs and the Future of New York." The show, opening this week at the Urban Center Galleries, delves into how today's (and tomorrow's) city fits into Jacobs' ideas and also examines how the public can draw on her values, given the major developments and rezoning now in progress.

In case you've been sleeping for the past year and a half, activist and journalist Jane Jacobs stood up to Robert Moses when he planned to raze parts of Greenwich Village and SoHo under the guise of urban renewal. Since her death in 2006, there has been feverish attention to her efforts in the form of tributes, namings, medals, and, even, a knit-in. Time Out has a handy Jane Jacobs 101 primer for those not in the know.

The exhibition, featuring text, images and multimedia, addresses how her values shaped today's streets and what role, in the context of a rapidly changing cityscape, they will have in the future. It asks New Yorkers to "observe and recognize the best of their city and [to] become citizen activists advocating for positive change." It's even accompanied by a whopping eight walking tours and seven programs throughout the fall, including a two-parter on the "Oversuccesful City," a look at university expansion in the city and a panel on whether New York is losing its soul.

Speaking of soul, Time Out surveys the top soulful neighborhoods and the ones that lag behind in a Jacobs-derived package that, referencing her, describes New York as a "ballet." Number one on the list is Alphabet City, for its low-squat, gritty blocks and "archetypal characters" like "blue-collar lifers, old-school bohemians, Rent-worshipping students, project-bound families, and, yes, hipsters." Chinatown comes in at a close second.

Last on the list is the perpetually-bruised Murray Hill, partly for its nine Starbucks and 32 chain banks. Carnegie Hill is second to least soulful, for its lack of "lower-class housing" and abundance of tourists. So, does being low-income boost one's soul quotient? Just curious. And why aren't Yorkville's (#21) Mom and Pop stores and vintage shops galore mentioned? We wonder how long it will take for Nolita (#5) and the Lower East Side (#8) to swallow up Chinatown and for streets in Alphabet City and the East Village (#7) to end up like just like Bleecker St. in Greenwich Village (#10). 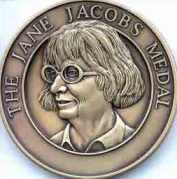 But back to the exhibit. The NY Times says it glosses over any ambiguities or problems with Jacobs' vision and instead "leaves her intact, as a populist prophet." To us, the MAS exhibit seems like an answer to last spring's triple threat of Moses exhibitions that attempted to take back the controversial former Parks Department commissioner's legacy from advocates like Jacobs who were opposed to Moses' methods and, ultimately, what they perceived as his bungled plans to reinvent New York.

In other words, the battle continues!