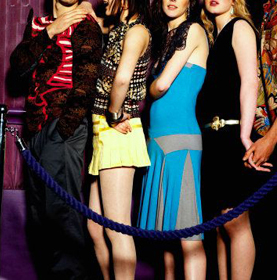 Get excited: There’s going to be an “exclusive” lounge opening any day now on the Lower East Side! It’s called The Eldridge (named for the street it’s on) and it promises to fabulously fill the void left by Luv 24/7, the previous lounge at the address. But what’s going to make The Eldridge sail where Luv 24/7 foundered? Owner Matt Levine tells Grub Street that, for starters, his 13-table room is going to have movie and popcorn nights on Mondays. And it’s going to be closed on weekends, because “as far as the vibe goes, the people who go to the Eldridge, they’re not in the city on weekends.” Other selling points:

And on and on about Kate Moss and Tom Cruise and chauffeur service via Escalade, all climaxing in Levine’s assertion that “we’re not doing a lot of press. We’re going to be cool because we’re cool, not because we have a publicist doing press for us.” On second thought, the interview actually climaxes with commenter number one, who speaks for all that is noble and just in humanity: “I have never wanted anybody to fail more than this guy. BIG DOUCHE!”

#club
#Eldridge
#lounge
#Lower East Side
#private
Do you know the scoop? Comment below or Send us a Tip