New Interactive Play Will Recreate Needle Park On The LES

In 1965, LIFE magazine published a chilling photo essay focusing on the lives of a young heroin addicted couple—"two lives lost to heroin," as LIFE put it—living in NYC. Photographer Bill Eppridge captured subjects John and Karen, self-described as "animals in a world no one knows," in jail, shooting up, looting cabs, and clutching one another in Manhattan apartments. The essay hit such a chord that it served as the inspiration for the 1971 Al Pacino film Panic in Needle Park—"Needle Park" referring to areas where heroin addicts hung out—and now, LES-based theater company Live In Theater is using it as the basis for their new interactive production, J & K 1965, which invites viewers to travel back to the drug-drenched Lower East Side of the 1960s.

The theater's creative director Carlo D'Amore loves real New York history. "The Lower East Side, as far as American history goes, is so rich. I mean there's very few places in this country that have the amount of history that's come through these streets," he told Gothamist. Though Live In is best known for their murder mystery parties—their popular Lombardi Case 1975 show invites viewers to solve the mystery of a murdered politico's daughter—there's no mystery to solve here.

The entire experience will be "highly interactive"—think Sleep No More, or the fictional Kitty Genovese play in Season 5 of GIRLS (D'Amore told us that while J&K 1965 wasn't totally inspired by that episode, "I really love the show and I think [Lena Dunham's] amazing"). In this case, however, you're allowed to talk to the actors, and audiences will be capped at 14. "It's a very, very intimate experience," D'Amore, who founded Live In Theater in 2009, told us. "Basically, we've taken those photos [from LIFE], used them as primary source material, and created a story of what we think a part of their life would have been like. And the audience gets to go on this ride."

In fact, it appears the actors and the audience members will essentially fuse as one, with lots of improvisation coming from both sides. "Everybody will at least get to play one if not two roles. And some people will play three, four roles," D'Amore said. "It depends on how people step up and how they embrace the relationship with these two individuals." 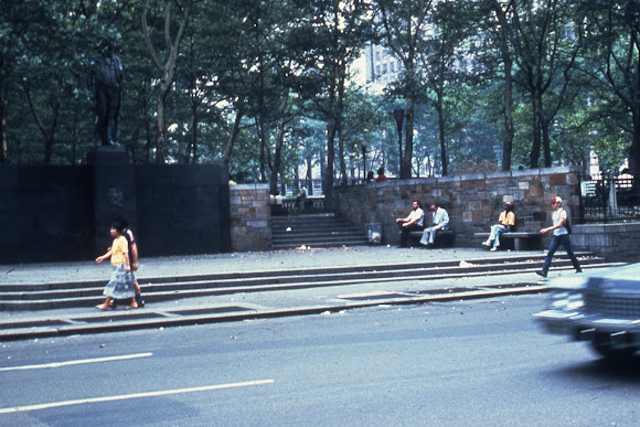 "Walls on the perimeter of Bryant Park kept people out, and hid illicit behavior within." (Courtesy of BPC)

D'Amore said that to recreate 1960s New York, he did "pretty in-depth research into the actual LIFE magazine article" and its subjects John and Karen. "But though it was inspired by these two people, it's become way more about the drug addiction. So it's really about being with people who are sick," D'Amore said. Though the 1971 film's Needle Park is actually Sherman Square on the Upper West Side, this production takes place in Sara Delano Roosevelt Park, which the team will transform into "a fictionalized Needle Park" on the LES, D'Amore said, noting "there were Needle Parks all over" the city in the 1960s (including Bryant Park!)

Even if you don't get a ticket, you might be able to spot some performers running around. "The set is the city itself. It's an entirely outdoor experience," D'Amore said.

He also noted that while he hopes audience members will enjoy themselves, this isn't an attempt to make light of heroin addiction, either in the 1960s or the serious opioid problem plaguing Americans today.

"We will have bonded with these individuals. And we'll see their humanity," D'Amore said. "You're playing characters who are on their side, characters who are against them, friends, foes, family, fellow people who are also in the throes of heroin addiction. And this also has to be done in a way that's very tactful. Because we're not glorifying drug addiction at all. We're just trying to give people an in-depth look at drug addiction."