If you’re that person who won’t touch a subway pole, or refuses to go bowling, you will find yourself both vindicated and triggered by the new Germ City exhibit. The Museum of the City of New York marks the 100th anniversary of the 1918 Spanish flu pandemic with an exhibit that reminds New Yorkers that what makes us great also makes us vulnerable: germs love a bustling, crowded, international city, too. And we’ve been in a protracted battle against contagious-disease carrying microbes since long before we built subways or bowling alleys. 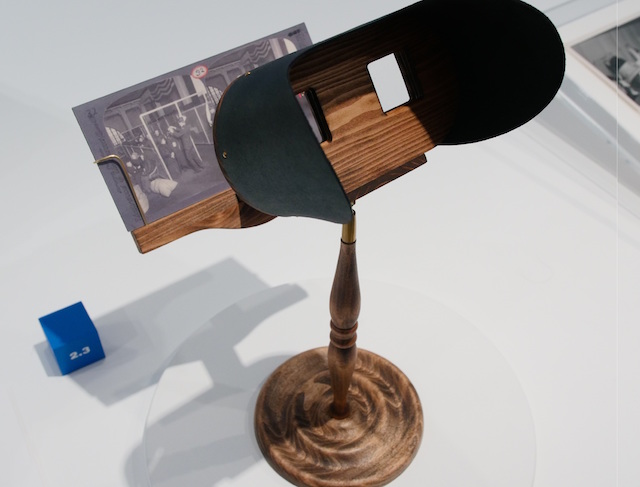 Microbes and the Metropolis Stereoscope. (NateLavey / Museum of the City of New York)

When you walk into the exhibit, there are a few items that are so big, they’re impossible to miss: Jordan Eagles’s "Blood Mirror," a large sculpture that contains blood donated by gay, bisexual and transgender men; an “iron lung” which looks like a human-sized submarine, used to assist the breathing of polio victims and a full protective suit like the one used to protect Bellevue Hospital’s staff and reduce the spread of disease during the Ebola outbreak.

It’s worth the trip to the museum just to see the original film copy of "Clean Up: We Care About New York," a terrifying PSA (that we've revisited before) made by none other than David Lynch. WARNING: rats.

Together the artifacts tell the story of contagious disease thematically rather than by disease, examining how we contain, investigate, and care for people regardless of whether they have contracted smallpox, yellow fever, diphtheria, cholera, influenza, polio, HIV, ebola or any of the diseases New York has battled over the years. The diseases may have changed over time, but the concerns stay the same. How do you contain disease, and fear, when there’s an outbreak?

"Germ City" opens Friday, September 14th, at the Museum of the City of New York, and runs until April 28th, 2019. WNYC is presenting a series of Germ City stories, as part of a collaboration with the Museum and the New York Academy of Medicine—you can read them here.

#germ city
#museum of the city of new york
#original
Do you know the scoop? Comment below or Send us a Tip