by Danny Lewis and WNYC Staff

Schlitzie was born with microcephaly: a condition where a person's brain doesn't develop properly, resulting in their head being smaller than average. At the time, people like Schlitzie were derided as "pinheads," and he was no different. From traveling carnivals to Coney Island’s Dreamland, Schlitzie was always presented as something other, an oddity of history or the natural world—he was billed as everything from "the Missing Link!" to "the Last of the Aztecs!" 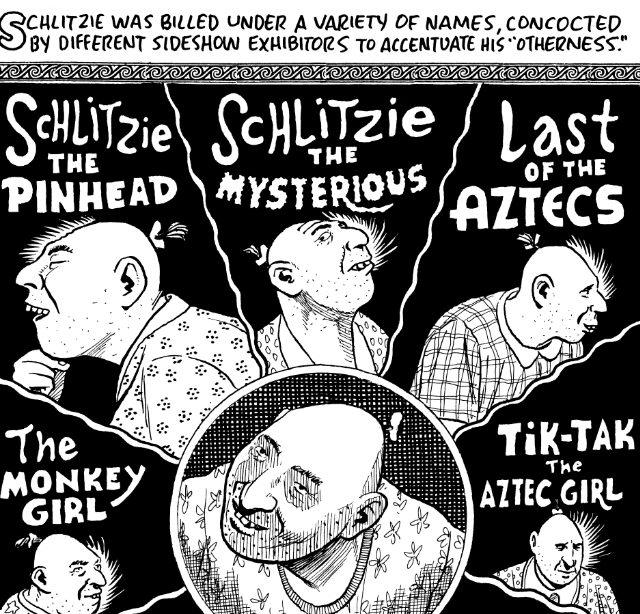 Cartoonist Bill Griffith's fascination with Schlitzie goes back to the 1970s, when he went to a midnight screening of Tod Browning's classic horror movie, Freaks. The 1930s film, which takes place behind the scenes at a traveling circus, shocked audiences for its macabre plot and for casting real-life sideshow performers like the limbless Prince Randian, and conjoined twins Daisy and Violet Hilton. But Griffith credits Schlitzie's brief appearance in the movie for planting the seeds of his iconic comic strip character, "Zippy the Pinhead."

"You can't tell that he knows the camera is on him. He's just being himself. And when I first started doing Zippy, I stayed with that simple nature. I pushed it a little further," Griffith said.

After decades of drawing Zippy, Griffith decided to finally take a look at who Schlitzie really was. He began work on Nobody's Fool and found that much of Schlitzie's life in the sideshows was fairly well-documented. Griffith also dug into the logbooks that many traveling carnivals kept to keep track of the daily goings-on of the circus, unearthing nuggets about Schlitzie’s life as a performer.

“It was all based on either interviews or research of memoirs by sideshow people when they talked about Schlitzie,” Griffith said. 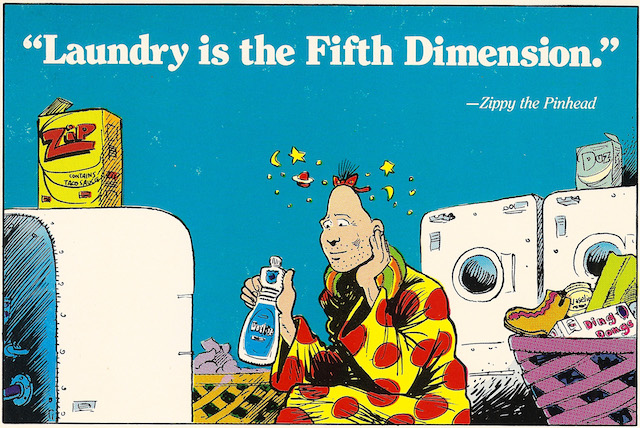 Zippy the Pinhead, inspired by Schlitzie. (Courtesy of Bill Griffith)

However, the details of his early life were more or less lost. Here's what's known: Schlitzie was born in 1901 to German-Jewish immigrants in the Bronx; His name might have been "Simon," and his parents were probably paid $75 dollars for sending him off to the sideshow. Aside from those basic details, Griffith had to make educated guesses and imagine some scenarios that Schlitzie might have experienced.

“I make his father the bad guy, just happy to get the $75 dollars, but I make his mother just have a normal, human reaction and to be full of guilt for what she did,” Griffith said. 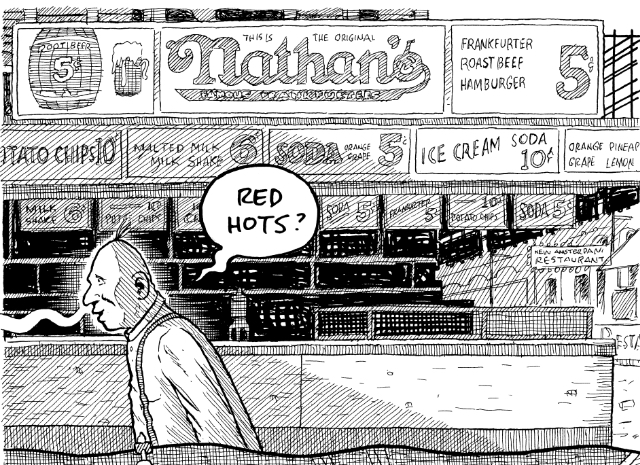 Schlitzie was undoubtedly exploited, but that doesn't mean he wasn't cared for. The community of sideshow performers he found himself in likely gave him comfort and consideration that he wouldn’t have found had he stayed in the Bronx. Adam “Real Man” Rinn, the dean and self-styled “professa” of the Coney Island Sideshow School, says performers watched out for each other, and doubly so for people with intellectual disabilities, like Schlitzie.

To celebrate the release of “Nobody’s Fool,” Bill Griffith will be giving a talk at the Coney Island Museum on Saturday, June 1st at 5 p.m.

For more,listen to reporter Danny Lewis's story for WNYC: