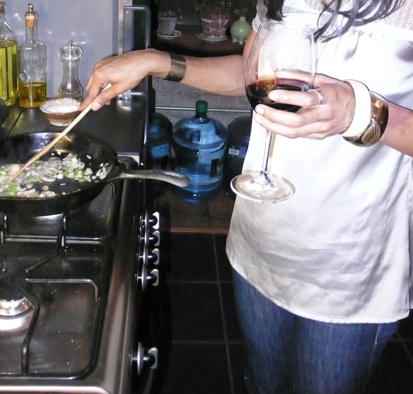 Dating and eating converge in a new Brooklyn-based program called the Feed Me Show...and it looks like the producers need some Brooklyn singles to heat things up in their kitchen:

We're looking for a few attractive Brooklyn singles who have it where it counts -- in the kitchen. No acting experience necessary, but you must have an exhibitionistic streak, cause we're going to get up close and personal on video, in a series that hits the web this spring. No sex, no nudity. This is not an icky "modeling" call. We're all about food and love.

Guys and gals will have to whip up some personality along with a meal during a kitchen tryout before getting any airtime. But the powers that be say even royally screwing up your dish could be charming. They just filmed their first episode, and if you want your shot at love served up with a piping-hot plate of pasta puttanesca, check here for info.

Chosen ones can expect to be set up "on a date at Williamsburg's own Brooklyn Photo Studio, in the kitchen. One of you cooks for the other. We record the date, distill it to its culinary and emotional essence, and show it on the web." Just who is behind this mash-up of internet, dating, food and reality television? A bunch of Brooklyn writers, film-makers, photographers, foodies and stylists, of course. They tell us that their "first episode will appear, serialized over the course of a week, on our website this month. We're expecting to offer a steady content stream in May."