Banksy has just posted this photo of his latest piece—which is somewhere in Greenpoint—on his website. So far each piece in his month long open air residency on the streets of NYC have been different in style—this one is all text, saying:

"I have a theory that you can make any sentence seem profound by writing hte name of a dead philosopher at the end of it. — Plato"

So anyone know where there's a grey-blue door in Greenpoint? Get there before Omar does!

UPDATE, 3 p.m.: The owner of the building (or someone who works there) first covered the piece with metal, presumably so he can sell the door...

And then he straight up just removed the door:

A witness to the removal, Manny Peralta from Bushwick, tells us, "The workers didn't seem bothered... People just gathered In the front. Not saying much. Just watching two men working on the door. Happy Omar didn't get to destroy it but mad that I didn't make it time." He sent over this photo from the scene: 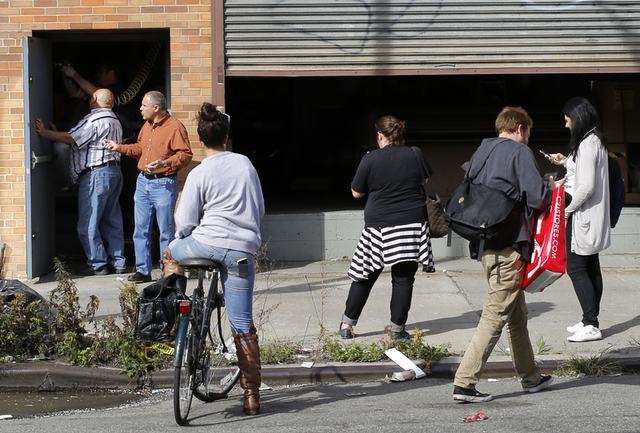 #banksy
#better out than in
#greenpoint
Do you know the scoop? Comment below or Send us a Tip