MTA advertising gave us the gift of Dr. Zizmor. (Photo via triborough's flickr)

Do you feel overwhelmed with paid content when you enter the city's subway system? Jordan Seiler has created an app that turns ads into art, just by aiming your iPhone (you may have seen an ad or two for those particular devices) at them. In the video below—essentially a commercial for the (free) app—the viewer is told that The Man is "taking advantage of this [commuting] audience, [with] advertising found in nearly every station—from the train cars, the platforms, the the turnstiles, and everywhere in between, advertising turns our daily commute into one giant commercial for the latest products and ideas." 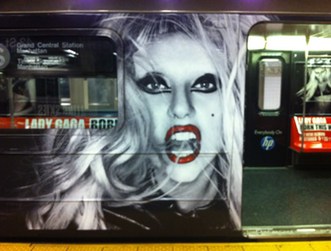 We asked Seiler a little bit about his campaign to eliminate "unwanted advertising," and he told us:

"This doesn't require the removal of ads. They can keep the ads up and in a few years when we are all wearing some type of heads up display we can just passively block them out by running this type of app.

That said the MTA makes about $250 million on ads per year. With over 1.7 billion rides that equals about 15 cents per ride if riders ended up shouldering the entire burden. With an operating budget of over $13 billion, I would expect some of that increase could be covered internally as well.

It does seem a little extreme to ask riders to pay to remove advertising, but when you consider the harmful effects of over consumption on our minds and planet, it becomes a little more bearable. It should also be noted that CBS outdoor makes a lot more than $250 million off the advertising infrastructure they have set up in our transit system. The MTA could likely save us 15 cents per fare by simply increasing the percentage of revenues CBS gives us in return for being allowed to operate on our shared property."

We've called this to the attention of the MTA's Adam Lisberg, who tells us:

"He’s wrong—we made $130 million from advertising last year (or 1% of our budget). Still, he appears to think our 5.8 million daily subway customers should pay more for each ride in order to get rid of advertising in the system. We don’t agree. We have cut more than $1 billion in annual costs from our budget since 2010, and we’re always looking for ways to reduce our costs—not to increase them. Every dollar we get from advertising is a dollar we don’t have to get from fares or taxes."

Confronted with Lisberg's comment, Seiler now admits his math was wrong. "I don't know why 250 million was kicking around in my head but I am glad you have brought it to my attention that that number is wrong," he said in an email. "I guess that makes it only about 10 cents per ride to get ride of all outdoor advertising in the system. That said, NO AD really isn't about eliminating ads from the system but rather providing riders with another option as they move through the system.

"We all know the effects of overconsumption are felt on our minds and environment and providing a way to opt out of that infrastructure while increasing our cultural consumption, is our final end goal. In response to the MTA, I am excited they have found ways to cut their operating budget by over a billion dollars annually. I would suggest that the next 130 million they find lying around be put to improving the mental health of its riders by eliminating the burden of commercial messaging."

It's also worth noting that the MTA does a pretty good job of displaying art, intermingled with the ads. Subway stations have everything from artistic tile-work to statues to pop-up shows like last year's tribute to Marilyn Monroe:

For more analysis, we turned to Native New Yorker Jake Dobkin, who has been living with these ads his entire life—when asked if advertising was so inherently evil that we needed to block or remove it, he replied:

"No, not inherently evil, but certainly evil when it proliferates too widely. It depends, to the extent the subways are owned by the public, we have a right to say how much advertising runs on them. I think generally the public would agree that there’s a limit past which it becomes annoying visual pollution. I don’t like the train wraps for that reason, but I'm not sure everyone would draw the line there... but most people would probably object if they changed the A Train to the American Airlines A Train or whatever." 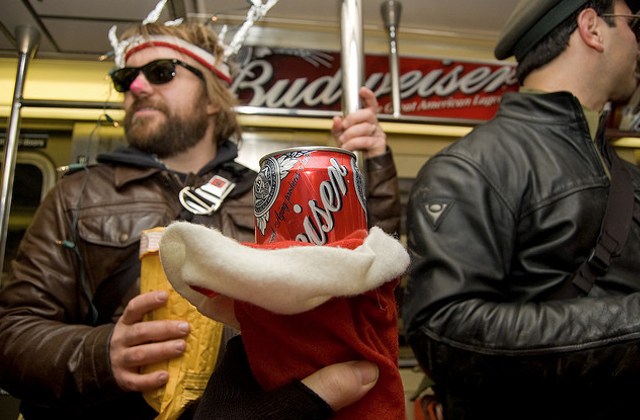 Now crack open a nice cold Bud and have a civilized discussion about all of this in the comments sections, sponsored by American Apparel.