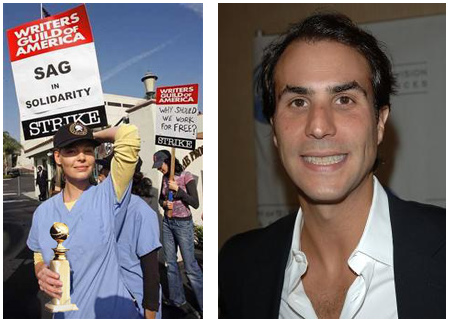 Things got a little ugly since the Golden Globes fell victim to the writers' strike. Here are two quotes from both sides of the picket line:

“We [WGA] are grateful to our brothers and sisters in SAG for their continued solidarity and support. The entire awards show season is being put in jeopardy by the intransigence of a few big media corporations. We urge the conglomerates to return to the bargaining table they abandoned and negotiate a fair and reasonable deal with writers to put this town back to work.” - WGAW President Patrick M. Verrone in a statement we received.

"[NBC is] obviously trying to find a solution to satisfy fans of these great movies and all the incredible stars who have worked so hard all year and got this incredible opportunity. Sadly, it feels like the nerdiest, ugliest, meanest kids in the high school are trying to cancel the prom. But NBC wants to try to keep that prom alive." - NBC Entertainment co-chief Ben Silverman (pictured at right) to E! host Ryan Seacrest.

If the Golden Globes are equivalent to that guy's prom...we suddenly feel very satisfied with our own prom night.