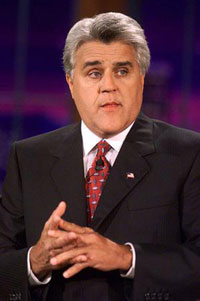 All you Tonight Show Headlines and Jaywalking fanatics, stop your worrying: Deadline Hollywood Daily reports that Jay Leno will be staying at NBC when his Tonight Show contract is up--and will be moving into primetime with a Monday-to-Friday weekday at 10 p.m. talk show.

Conan O'Brien has been the longtime successor to the Tonight Show throne, but with Leno's strong late night ratings success and NBC's overall ratings disappointments, some were wondering if NBC was in a position to lose a valuable asset like Leno, even possibly alienating him. Heck, even rival David Letterman wondered why NBC would usher the streaking Leno out). And then ABC became very interested in offering Leno a late-night slot, possibly booting Nightline out and moving Jimmy Kimmel's show. Now there's all kinds of new speculation. Deadline Hollywood Daily gives it whirl:

[I]t may very well secure NBC's 10 PM slot and Jay's legacy. Or it could all go into the crapper if Leno's 11:30 PM audience fails to follow him. Or if Jay doesn't attract more eyeballs than his most recent average of 4.8 million viewers tantamount to a mere pittance for primetime. Or if Leno's show cuts into Conan's viewers which cuts into new Late Night host Jimmy Fallon's audience because there's 3 similar programs in a row (and 3 1/2 if you count Carson Daly's abysmal half-hour). Suddenly, there's talk show format fatigue.

The NY Times writes, "No broadcast network has ever before offered the same show in prime time five nights a week. Such so-called 'stripped shows' have been a staple of daytime broadcasting," but Variety points out, "NBC toyed with the idea in 1992 as a way to keep David Letterman at the network; its believed the network also considered stripping 'Dateline NBC' on the network back during a period of earlier ratings woes." While Leno is rumored to make $40 to 50 million a year on the deal, it's also thought NBC would save money because it won't have to develop programs.

So, we guess this means Law & Order and Law & Order: Special Victim moves to 9 p.m.

#conan o'brien
#jay leno
#nbc
#tonight show
#tv
Do you know the scoop? Comment below or Send us a Tip
A new Gothamist is coming! We’ve moved comments over to our beta site. Click here to join the conversation and get a preview of our new website.