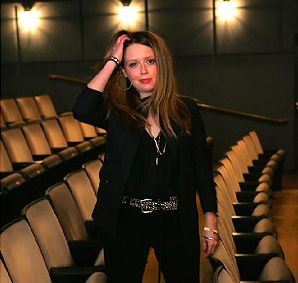 Natasha Lyonne – remember her? – has resurfaced, and not at the morgue! In fact, the young hellion seems to be doing quite well for herself – at least that’s the portrait painted by this convivial Times profile, in which reporter Robert Simonson smokes Marlboro Lights with her on the roof of Theater Row, where she’s to appear in the new Mike Leigh play Two Thousand Years. Though off the horse, the actress isn’t all yoga and Celestial Seasonings – she’s quick to point out that she usually smokes Marlboro 72’s, because they’re “like something Robert Mitchum would smoke.”

She could do worse for role models; Mitchum was a notorious drinker but a real pro who lived to be 79. While in her early twenties, Lyonne seemed destined for a spectacular Hollywood flame out; after crashing her car and getting a DUI in 2001, she was arrested again in 2004 on charges that she broke into a neighbor’s East Village apartment, smashed a mirror and threatened to “sexually molest” their dog. Then she went missing and may have been living on the street, finally resurfacing at Beth Israel Hospital with a nasty case of Hep C, a collapsed lung and an arm full of needle marks.

But that’s all behind her now! She was referred to director Scott Elliott for the role by her friend Chloë Sevigny, who says Lyonne was perfect for the play because “she lived in Israel and has strong opinions about the subject matter.” Two Thousand Years, which was a hit in London, concerns a secular Jewish family and their domestic trauma when their son becomes “seriously devout.” Lyonne insists she’s kicked the “opiate” use and turned the beat around: “I wasn’t dead at 27, so I might as well be 30. You’re already in it. You may as well be in a rocking chair some day eating a lobster club.”

A not-so-subtle jab at ex-boyfriend Eddie Furlong, lobster liberator, who may have introduced Lyonne to opiates? Discuss.

#beth israel
#Chloe Sevigny
#dui
#east village
#Eddie Furlong
#hollywood
#lights
#london
#Mike Leigh
#natasha lyonne
#Robert Mitchum
#Ruby Washington
#Scott Elliott
#the new group
#theater
#washington
Do you know the scoop? Comment below or Send us a Tip
A new Gothamist is coming! We’ve moved comments over to our beta site. Click here to join the conversation and get a preview of our new website.