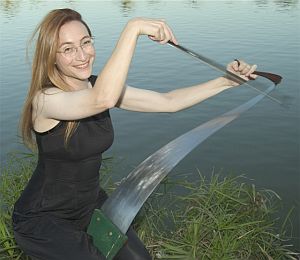 If you've spent much time making your way through they city's transit system, your ears have probably been mesmerized by the ethereal music of Natalia "Saw Lady" Paruz. When she's not calming straphangers with serene renditions of Ave Maria, Paruz ventures above ground to join everyone from the Israel Philharmonic Orchestra to the Little Orchestra Society. Last fall she even made her debut at Carnegie Hall as a musical saw soloist!

This Saturday, Paruz will be on hand at the 6th annual NYC Musical Saw Festival (which she founded) in Astoria. Over twenty sawists from around the world are gathering for the event, which will feature lessons for curious audience members, demonstrations on non-traditional saw playing, a presentation spoofing classical music with the saw, and finally The Chorus of the Saws, with all participating saw players playing together at once. [Saturday at 2 p.m., Trinity Church, 31-18 37th Street, Astoria.]

So how did you come to play the saw? I was a professional dancer: a trainee with the Martha Graham Dance Company of Contemporary Dance, a tap-dance teacher and demonstrator for Dance Masters and Dance Educators of America. I earned a living performing in musical theater; in short, I was a happy dancer until one day, on my way home from Lincoln Center, I crossed the street and was hit by a speeding taxi-cab. This was the end of my dance career. I suffered permanent damage to my upper spine.

Needless to say, I was devastated. I have dedicated my life to dance, and now what was I going to do? To cheer me up, my parents took me on a trip to Europe. While there we attended a show for tourists, and one of the acts was a musical saw player! This was totally new to me, and it blew me away. I thought the sound was phenomenal, and what really appealed to me was the visual: the fact that the whole instrument moved and the sawist’s upper body along with it. It was like a dance!

I went backstage to talk with the sawist and asked him to give me lessons. His answer was a flat and resounding "No." Of course I said I would pay him, and asked how much he wanted, but he just told me that I didn’t need a teacher. "Pick up a hand saw, hold it the way you have seen me do on stage, and you’ll figure it out," was his instruction. Discovering the art form of playing music on a saw felt to me like God/providence/fate pointing the way for me, telling me: "You are not meant to be a dancer, you are meant to be a saw player!"

What is the abridged history of the saw’s evolution as an instrument? About 300 years ago woodworkers discovered the sound capabilities of their tool. At first it was a folk instrument. Then it was used for liturgical music by priests and missionaries, to lead the hymn singing at Sunday Services. From the end of the 19th century it was widely used in Vaudeville shows in the USA and at circus shows in Europe. Around WWII the art form almost disappeared. About 14 years ago I joined the efforts of a handful of people to bring it back into popularity. Today, I am happy to say, the number of sawists is growing rapidly.

Okay, say somebody picked up a saw today at the hardware store. Practicing an hour a day, how long until he/she can play Ave Maria? You mean in a recognizable way? That depends on the individual's talent and ear. If you have perfect pitch, that helps a lot. At the annual NYC Musical Saw Festival you might see some sawists who have been playing for many years who might not be so good, and others who have only been playing for only a few months who are good.

What’s the best saw to get for musical purposes? The more expensive a saw is, the better sound it will have. The longer the blade, the more notes there will be on it.

How many saw players will be playing at one time during the festival? 25 have registered this year to play in the "Chorus of the Saws," an unrehearsed sort of jam-session where all the sawists – both accomplished and beginners – will play together.

Do you take requests? When I play in the subway, people come to ask me to play a particular song they have heard me play before. Kids ask for the theme from "Harry Potter." People in their 30s/40s ask for the theme from "Star Trek." Older people ask for Ave Maria, particularly to be played as a prayer for a loved one who is in the hospital or in memory of the deceased. The homeless man who is usually at Union Square always wants me to play Over the Rainbow, and a deaf person who says that the only sound that he can hear is the saw always wants me to play Hymn a l'Amour. 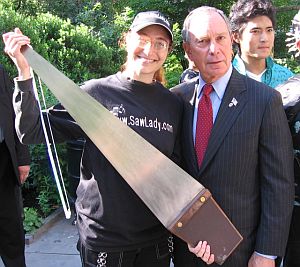 You’ve performed a lot in the subway. What are some of the most memorable reactions you’ve gotten? Amazing stuff happens in the subway every time I play there, which is why I keep a blog of it all, because I don't want to forget it. I've seen many acts of kindness, I've heard the life stories of many homeless people, I've met thieves and pickpockets, and I've learned that the people of NYC have a heart of gold.

A memorable reaction to my playing which comes to my mind is the gentleman who came up the stairs from the train platform at Union Square to tell me that when he heard the sound of the saw (without seeing me because I was upstairs) he thought he died, went to heaven and was hearing angels. He didn't care if he would miss his train, he had to come up to see the source of the sound.

Another memorable occurrence was when a blind man was listening to my playing. His face lit up with joy. Standing on the opposite side of the gathering of listeners around me was a lady who had nothing to do with the blind man. She noticed his joy. She came over to me, purchased my CD, went over to the blind man, put the CD in his hand and said: "It's for you; this is the music you are listening to."

Did the police ever chase you away like they do to some other performers? I've gotten my share of tickets from the police. The most memorable one is the one for $150 about 10 years ago; they said the teeth of the saw is a weapon, so I can't play that in a public space. Which is why the saw I play in the subway today has no teeth.

Another occasion when the police chased me away happened at 53rd street. The cop was so nice he apologized to me profusely for having to make me leave and he insisted on playing me the message on his walkie-talkie ordering him to get rid of me. He wanted to make sure I know that if it was up to him he would let me play there because he was actually enjoying my performance, but he got an order from his superior.

What are some of the non-monetary items people have given you while busking? Brand new watches (one was a Swiss Army), a cool pen that lights up when you write, a teddy bear, books, CDs – everything brand new, still in its wrapping. The funniest was a guy who put a pot-less plant in my donations box. A while later he returned and put the plant in a pot. Then he came back a third time with a little chair to stand the potted plant on.

I really love it when people give me flowers. When people give me food/candy I always give it to any of the homeless people who pass by. Some people gave me art work they made. The most memorable one is a poem. But of all the things people put in my donations box my favorite is notes people leave there, telling me how much they appreciate my being there.

Ever cut yourself on the saw? No, but I did break a saw once. That was in winter - I was playing in 35 degrees and the blade cracked as I was playing. If I hadn't stopped playing when I did, the blade could have snapped in my face.