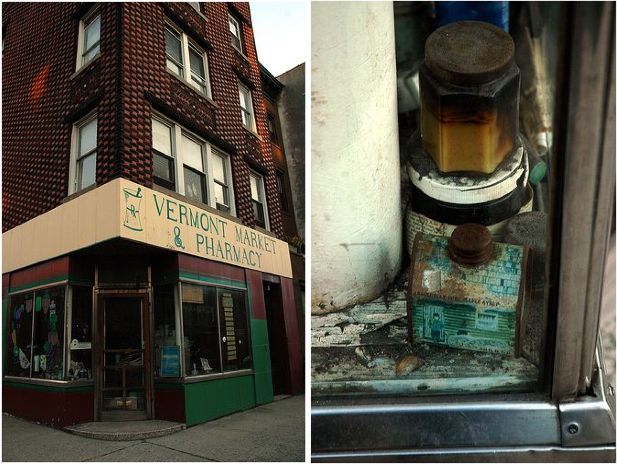 This past week, the NY Times peeked inside the Vermont Market and Pharmacy in Carroll Gardens, which has been closed for over a decade...actually, owner Mark Stein wouldn't let them inside, but he does shed some light on the shuttered store. Apparently when it was open, it had a 1920s aesthetic and "was a combination drugstore and market, selling specialties from Vermont"; prior to that, and under the same owner, it was called Mark's Pharmacy. These days it serves as a look into the past, a frozen-in-time storefront sitting on Henry and Sackett Streets. Local lore is that the suspender-wearing Stein is a quirky genius and recluse who is perhaps unwilling to sell his piece of prime real estate. He recently addressed some of the speculation about the store's past with the Times:

He dispelled some of the rumors, though, saying that aliens were not the reason the store closed down. Mr. Stein said: “It didn’t quite work out.”

Around 1996, for reasons he did not elaborate on, Mr. Stein tried something different, opening the Vermont Market and Pharmacy with a few partners, some of them puppeteers with Bread and Puppet Theater, based in Glover, Vt. Mr. Parke, one of the partners, lived for a time in a back room of the pharmacy.

After a year of being opened as the Vermont Market and Pharmacy, the store closed and has remained shuttered ever since. Stein hinted at re-opening as soon as this coming fall, however; but he didn't get in to what the latest incarnation would hold.

#brooklyn
#carroll gardens
#mark stein
#Mark's Pharmacy
#mystery
#storefront
#vacant
#Vermont Market and Pharmacy
Do you know the scoop? Comment below or Send us a Tip