Lost City visits one of the odder buildings in the East Village today, located at 62 E. 4th Street. Currently two of the five floors house the Duo Theater, but the top three levels have gone unused for nearly 40 years. Built in 1889, the current crumbling facade isn't the biggest mystery -- the architecture is. LC notes:

There's all sort of Italianate grandeur in the shapes and lines. But it's all thrown off by the bizarre, frontal, cylindrical metal fire escape, enclosed by a tubular metal grill. The top floor included a boarded-up space of what looks like a door. But to where? There's no balcony. And what was the intention of the column-framed open forum on the fourth floor?

Paint it pink and it could be the next Palazzo Chupi! 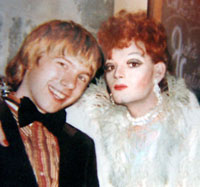 Cinema Treasures says that in 1969, the building housed a gay cinema; one commenter on that site noting that it was "owned by none other than Andy Warhol in the late sixties. It did indeed show adult fare and had the distinction of having Joe Dallesandro (Warhol Superstar) be a projectionist there as well have a revolving door of male clients who visited Dallesandro during the show."