"She's like, 'I don't need you,'" said Nadya Ali, an analyst for the Parks Department's Forestry, Horticulture, and Natural Resources team, narrating the thoughts of a female horseshoe crab. A smaller male had just given up depositing his sperm, and unlatched. As the lady horseshoe crab inched off of the sandy beach at Calvert Vaux Park in Gravesend, back into the Coney Island Creek, Ali turned to the male. "You're lucky," she said. "You shouldn't be going away, mister."

Ali and I were standing in leaky wader boots, ankle-deep in the creek at 10:00 p.m. on a recent Wednesday. Nearby, on the path from the parking lot, two men were sharing a joint. All around us in the shallows, illuminated by our headlamps and the occasional bulb flash, dozens of brown, barnacled horseshoe crabs—six inch-wide males outnumbering the larger nine inch-wide females—were swimming in circles, clumped together like Koi in an artificial pond. The neon-flashing Parachute Jump at Coney Island peeked over some trees to the south.

"Hey little guy," said Ellen Hartig, the wetlands project manager, as she bent over to measure the width of one of the horseshoe crab's shells. She might as well have been talking to a puppy.

Horseshoe crabs don't sting—a common misconception. Instead their long spiny tails work as rudders, and as leverage to right themselves when they flip upside down.

"They're also very awkward on the beach," she added. "If they get flipped and they can't turn over, they dry out. And then the gulls go after them. So it's really a very vulnerable time."

Vulnerable, but necessary. Females lay hundreds of eggs at a time at this beach, which take two weeks to mature. Eggs that aren't eaten by shore birds hatch as tiny, soft horseshoe crabs with tiny, soft shells and are carried back out to sea by the tide. 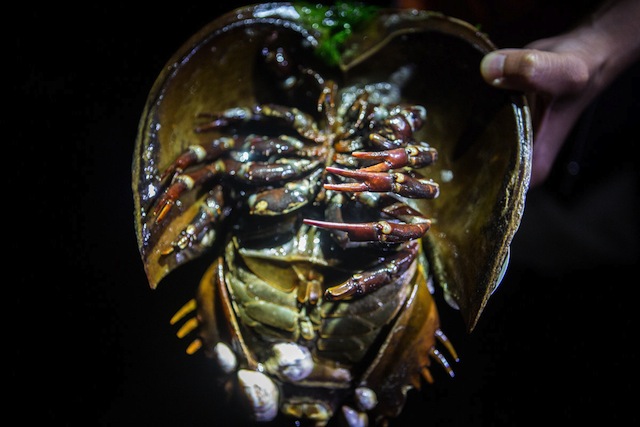 The underside of a male horseshoe crab (Scott Heins / Gothamist)

During full and new moons in May and June, when tides are at their highest, Parks naturalists gather at Calvert Vaux—often with small groups of volunteers—to count the horseshoe crabs on the slip of sandy beach and bore tiny holes into their carapaces (the shells that they are born with) in order to tag them. With the tags, scientists can monitor mortality rates, and migration patterns from beach to beach.

Matt Sclafani is a marine educator at the Cornell Cooperative Extension in Suffolk County, which has been in charge of the New York Horseshoe Crab Monitoring Network since 2005. He explains that until the early 2000s, horseshoe crabs were an unregulated species. Scientists from Maryland all the way up to Cape Cod in Massachusetts started to worry when they noticed a population dip among shore birds who eat horseshoe crab eggs to survive, like the Red Knot. Small and rust-collored, Red Knots have one of the longest yearly migrations of any bird species in the world—from the Arctic all the way to Tierra del Fuego, an archipelago off of the southern tip of South America.

Humans rely on horseshoe crabs, too: horseshoe crab blood clots effectively around bacteria that can harm people, so pharmaceutical companies harvest it to conduct FDA test on new drugs, prosthetics and pacemakers.

"We actually, as humans, get a real benefit from the horseshoe crabs," said Kim McKown of the NY State Department of Environmental Conservation in a recent mini-documentary about the horseshoe crab count. "If we were to let the species go extinct right now, it would really be a problem for us." 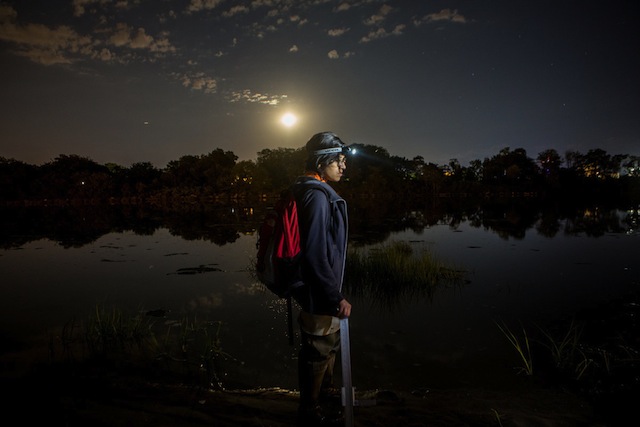 On a good night at Calvert Vaux, hundreds of horseshoe crabs congregate—on June 16th, the busiest night this season, Parks counted almost 400 in one go. (For comparison, peak spawn in the Delaware Bay runs into the thousands; the night I went to Calvert Vaux, we counted 77.)

In addition to Coney Island Creek, Cornell monitors horseshoe crabs on the north and south shores of Long Island, and in Jamaica Bay.

In Gravesend, Hartig said, the horseshoe crab population seems to be holding relatively steady. Fishermen harvest them to use as eel bait, but New York State sets quotas for how many can be harvested each season. Poaching hasn't been an issue.

The biggest threat to New York City horseshoe crabs is the proliferation of bulkheads—especially since Hurricane Sandy. Before the Parks department restored Calvert Vaux in 2012, horseshoe crabs weren't able to spawn there. "They would just hit the wall and swim around and that was it," Hartig recalled.

City-wide, Calvert Vaux is the only sandy slip that's been restored specifically as a spawning ground for horseshoe crabs. "The things people do to protect their property are affecting the intertidal zone," Sclafani said. "If the crabs can't lay on the beach, they can't survive."

But horseshoe crabs are notoriously resilient. Coney Island Creek is connected to a sewer overflow pipe that releases road water and, when it rains, sewage. The night we visited, one horseshoe crab swam along with a piece of toilet paper trailing from his shell.

"They have been around on earth for 450 million years," Sclafani said. "They've survived many mass extinctions."

Horseshoe crab spawning season is at its tail end, but the Parks Department will be back next year, during full and new moons in May and June. You can learn more about New York's horseshoe crab monitoring project here.